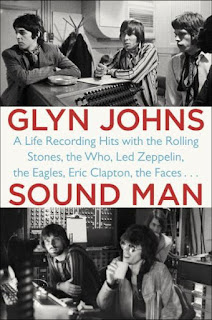 In addition to all of the great rock bands that came out of England and America in the 1960s and 1970s, there were also several producers who used their creativity and ingenuity to leave as much of an imprint on the music as the artists themselves. Alongside the likes of George Martin, Phil Spector, and Brian Wilson, Glyn Johns was and remains a giant when talking about those behind the control room glass. Johns was an engineer and producer who worked with some of the biggest and best bands of the era including the Beatles, Rolling Stones, Who, Led Zeppelin, Eagles, and Small Faces, as well as numerous others. In Sound Man, he tells his life story through the lens of his working firsthand on the music of rock's greatest era.

Beginning with his childhood growing up in Surrey (often running into other young kids who he'd later work with like Jimmy Page and Jeff Beck), Johns tells of his journey from a boy who fell in love with singing in the church choir to a teenager who caught the rock and roll bug like just about every other kid his own age in England in the 1950s and early 1960s. Johns became a musician himself and embarked upon a frustrated (and frustrating) solo career in the early 1960s. Hard up for cash and needing a job, he took a position as a tape operator with Decca Records with the hopes that he could taken advantage of some studio time and the company's promotional muscle to record and release his own records. While he did record a few singles (and hit #1 on the charts in Spain), he began to focus more on the studio job. Becoming one of the youngest recording engineers in England, he embarked upon a career which would see him produce and engineer some of the biggest and best singles and albums of the 1960s and 1970s.


Johns uses short to medium length chapters to tell his life story and the book is more like a string of vignettes and anecdotes than a traditional linear narrative. It makes for a very entertaining read, as does the fact that he's never afraid to share how he really feels. He's famously opinionated and abrasive and over the years I've read numerous accounts of disagreements he's had with artists he worked with, so it was interesting to see Johns not only corroborate some of those stories, but to also give his side of the story as well. While he shares stories about some of his favorite obscure albums that he's worked, it's really the big, well-known singles and albums he had a hand in that make up the meat of the book. Johns engineered or produced almost all of the Rolling Stones' greatest singles and albums of the 1960s and early 1970s, all of the Small Faces' and Faces' work, the Beatles' Let It Be sessions, and The Who's final four albums before Keith Moon's death (Who's Next, Quadrophenia, The Who By Numbers, and Who Are You).

Through it all, Johns maintained his love for music and counted his blessings for having been in the right place at the right time to carve out such a career during the greatest period in history for popular music. Where necessary, he (rightfully) toots his own horn, mainly when discussing the various recording innovations (including his drum miking technique) which offers fascinating insight into the recording process if you're geeky (like me) about things like that. The reader can be confident in the reliability of Johns' accounts, too, because unlike many of his contemporaries in the producing world of that era, he abstained from drugs and drink and was thus unimpaired (other than fatigue from working long hours). The book is overall a bit light on details of Johns' life, so it can be viewed more as his professional biography more than a memoir, but that doesn't make it any less enjoyable. Overall, if you're a fan or that era of music and/or any of the bands Johns worked with, Sound Man is definitely worth a read.

I love getting feedback. We all do, especially when it's positive. As anyone who has written a book will tell you, one of the most nerve-wracking moments in the life of an author is right after it's been released. It may seem counter intuitive, but for as thrilling and exciting as it is to finally see your book in print, it's also incredibly stressful knowing that now the rest of the world has the chance to read it. The scariest thing of all is getting feedback once it's been out long enough for people to digest it: will people like it? Hate it? Will they like your writing or think you're a hack? All of this runs through your mind and even though A Win For Every Stitch is my third book, I still had these fears when it was released in December. However, in the same way that negative feedback can be hurtful (although beneficial from a learning standpoint), getting positive feedback about something you've written is one of the greatest feelings in the world. A

Robert Plant has forged a unique career over the past fifty years, first as the frontman, vocalist, and lyricist of the mighty Led Zeppelin , and then as a restless and always evolving solo artist. Still as musically and critically relevant as ever, he remains a fairly private and mysterious man behind the public persona. A book by author Paul Rees that I reviewed last year, based on extensive interviews over the years with Plant and numerous family and friends (although published without any actual involvement from Robert) did a nice job in trying to pull back the curtain in order to show what made him tick, although the narrative flow left a bit to be desired. It was a solid book, but left me wanting more. Shortly after, a new book about Plant was announced and piqued my interest as I still wanted to know more about the real person behind the facade. Dave Thompson's Robert Plant: The Voice That Sailed the Zeppelin, acknowledges Rees' book as "definitive" in

The Red Sox got a bit of a break this past week with two days off and only five games total. However, this will be their last lull until the end of June when they head to London for two games against the Yankees. They had a two-game series against the Rockies bookended by off days, but beginning with this weekend's series against the Astros the Sox will play thirty-four games in thirty-four days with only one day off (there's a doubleheader in there). Riding a five-game winning streak , Boston looked to keep it going against a talented but scuffling Rockies team before the big bad Astros came to town. (5/14 vs. Colorado Rockies): This game almost perfectly summed up the frustration that has been the 2019 Red Sox thus far. Chris Sale flirted with history when he struck out seventeen batters (without walking a single one!) over seven innings. The only blemish was a two-run homer he gave up to Nolan Arenado, but the Sox had scored three so they should've been all set, r

BOOK OPTIONS (Please Choose Based on Your Location) SIGNED copy of A Win For Every Stitch (USA) $19.99 USD SIGNED copy of A Win For Every Stitch (International) $29.99 USD My new book A Win For Every Stitch: A Fan's Diary of the 2018 Boston Red Sox Championship Season has just been released and is now available for purchase. For anyone who may have missed my original announcement of this book back in November , here's the blurb from the back cover:   "There are 108 stitches on a baseball and in 2018 the Boston Red Sox won 108 games: a win for every stitch. At the beginning of the season, Drew Athans decided to keep a running diary of every game to have fun and to see if he could do it. With the Red Sox going all the way and winning the World Series, it turned into the perfect memento of an historic baseball season which he's now decided to share with all Red Sox fans. Containing recaps of every game the t

The Red Sox schizophrenic season continued with a series in Kansas City to finish their road trip ahead of a hugely important four game set against Tampa at Fenway Park. After a dismal 2-4 week last week , this upcoming slate of games was set up for the team to get back on track and vault back into contention in the AL East. However, the injury bug started to bite a little harder with JD Martinez joining the ranks of the walking wounded with back spasms that rendered him unavailable for most of this week...and we all know how much this team struggles to score runs when JD isn't in the lineup. (6/4 at Kansas City Royals): Opening the series against a terrible Royals team, the Red Sox went down early 2-0 and it seemed as though the inconsistency and playing down to the level of their competition would continue. It took until the sixth inning when JD Martinez finally got the Red Sox on the board with an RBI triple. It actually looked like a home run to everybody except the umpi