BOOK REVIEW: Spider From Mars: My Life with Bowie 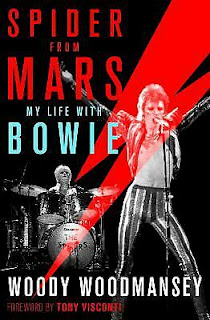 David Bowie was one of the most important songwriters, musicians, and performers of the 20th century and his work, particularly in the 1970s, is still revered today. None of that is up for debate. While fans can differ on which era of his music is the greatest, I'd suspect that the majority would agree that the entirety of his 1970s output was his peak. In the first half of that decade, Bowie put out some of his biggest and most famous albums, music in which he was aided, abetted, and augmented by his band The Spiders from Mars (or as they were usually more simply referred to, the Spiders). Chief among these Spiders was the legendary guitarist and producer Mick Ronson, but the sound and feel of those classic Bowie albums wouldn't have been the same without bass player Trevor Bolder and drummer Mick "Woody" Woodmansey.

With the shocking and completely unexpected death of Bowie in January 2016, Woodmansey is the only surviving member of the Spiders. Spider from Mars (released in 2017) is Woody's life story and offers up an up close and candid look at the young Bowie when he was still struggling to have his music and vision noticed, well before he became famous. Woody begins his story with his childhood growing up in the town of Driffield. Catching the drumming bug at a young age, Woody played in a succession of local bands in the Hull area as he got better and better. He eventually crossed paths with and developed friendships with his two future Spiders bandmates in Hull. As fate would have it, Ronson was invited down to London to play with Bowie and when he and then-bassist/producer Tony Visconti needed a new drummer, Woody was called.

Woodmansey joined forces with Bowie at a time when he had only had a moderate hit with "Space Oddity" in 1969 and was looking to completely change his vision. With Visconti still on bass (and the band known as the Hype), the band recorded the Man Who Sold the World album in 1970 which got things moving. After Visconti left and Bolder joined, the newly christened Spiders embarked upon the period of Bowie's breakthrough, recording and touring classic albums with him like Hunky Dory, The Rise and Fall of Ziggy Stardust and the Spiders from Mars, and Aladdin Sane. Through all of this, Woody offers up funny stories and a behind-the-scenes look at what Bowie was like in those heady days of ascendant fame. After a salary dispute with management, Woody was dismissed prior to the recording of Pin Ups while detailing the change in Bowie's persona and personality (impacted heavily as it was by drugs). With the bulk of the book being taken up with his time in Bowie's band, the remainder gives a good overview of his post-Bowie career in the 1970s and 1980s as well as his growing family and his reunion with Visconti and other Bowie alumni for a series of tribute tours in the 2000s.

Some of the most poignant moments concern Woody's initial shock and sadness at hearing about Bowie's death, something that only Visconti and a select few family members and friends knew was coming in the weeks before he passed. The entire book is easy and enjoyable to read because of how real and relaxed Woodmansey is throughout. He's candid and honest about what happened throughout his life and career, from his strained relationship with his parents as they discouraged his burgeoning career in music to what Bowie was like to work for and everything in between. There are some great anecdotes and nuggets of new information (like the time he was offered a spot in Paul McCartney's Wings in the mid-1970s) and while this book is in no way a salacious tell-all, it tells the interesting and engaging life story of a man who was a part of some of the biggest records and tours in rock history while offering a look at one of the most culturally significant figures in the history of music during the period where he was struggling to make it, told from the perspective of one of the few men who was actually there and a part of it as it was all happening.