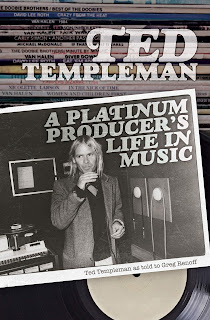 There are very few record producers who are as famous or accomplished as the musicians they've worked with. Names like George Martin and Phil Spector immediately spring to mind, but they're few and far between. There are fewer still who were successful on both sides of the glass, although there is precedence. Jimmy Page and Bernard Butler are two who immediately come to me, but one who I wasn't aware fit into that same category is legendary producer Ted Templeman. He's famous for having produced multiple hit records throughout the 1970s and 1980s, most notably for Van Morrison, the Doobie Brothers, and Van Halen, but he was also a successful musician in his own right before embarking on his career behind the board.


Author Greg Renoff, whose excellent book Van Halen Rising I reviewed two years ago, brings us this new book which is Ted's autobiography as told to Renoff. Starting with his birth and early childhood in the Santa Cruz area of California, Templeman recounts his youthful adventures and earliest music memories. A self-proclaimed jazz buff and drummer who tried to learn how to play any instrument he could get his hands on at his grandfather's music store, Ted ended doing what so many young music lovers did in the early 1960s and formed a band. As drummer and singer for his band The Tikis, Ted enjoyed some success gigging around California before an encounter with legendary Warner Bros. Records producer Lenny Waronker changed their fortunes. Rebranding them Harpers Bizarre in 1967 and getting them to record a cover version of Simon and Garfunkel's "59th Street Bridge Song (Feeling Groovy)," the band had a hit record and embarked upon a successful career that took them into 1970. I knew who Harpers Bizarre were and I've heard many of their songs over the years without every knowing that Ted was in the band. Forced to come out from behind the drums to become the lead vocalist, Templeman found himself disliking fronting a band while simultaneously being drawn to the production side during the making of their records. After the band's dissolution in 1970, Templeman signed on as a tape listener with Warner Bros. Records and worked his way up over the course of his career to become a senior vice president and one of the company's most accomplished producers.

Along the way, he produced Van Morrison and signed bands/artists like the Doobie Brothers, Van Halen, Nicolette Larson, and Little Feat. In addition to nurturing their talent early in their careers and producing their records with long-time engineer and friend Donn Landee, Templeman also developed long-lasting friendships with many band members like Eddie Van Halen, Van Morrison, Mike McDonald, Tommy Johnston, Lowell George, and Larson. As told through Renoff's vibrant writing, Templeman details his entire career through the stories behind making so many of those classic records. Beginning with how he worked his way up from tape listener to producer, he talks about not only his numerous successes, but also his failures with a candor and honesty that is refreshing. For every act he signed that turned into megastars like Van Halen and the Doobies, there were several that never sold any records. That's the nature of the business and Ted isn't shy about delving into what he thinks went wrong, either on their end or on his. Templeman is also very open about the difficulties his career brought along the way, most notably the long stretches of time away from his wife and kids and his substance abuse problems (both of which are connected). There was perhaps not as much on this aspect which could have really driven home how challenging navigating that career could make it on having a normal family life, but I can understand if Templeman decided he didn't want to dwell on that and preferred to keep the focus squarely on the music.

Ted Templeman and Greg Renoff have written a book that is a fascinating story not only of one man's successful career as a musician and producer, but a look behind the curtain at how the record industry worked during its heyday of the 1970s and 1980s. Whether or not you're a fan of any of the bands that Templeman worked with (and personally, of those bands I'm only a fan of Van Halen), if you love music you'll enjoy this entirely engaging and interesting book.