BOOK REVIEW: The Wax Pack: On the Road in Search of Baseball's Afterlife 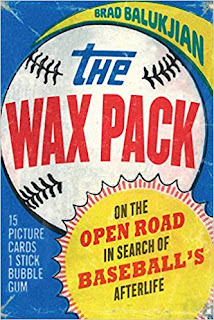 As a child of the 1980s and 1990s, baseball cards loomed large in my life when I was a kid. The year 1986 was the first in which I really fell in love with baseball, with my favorite team (the Boston Red Sox) and when I also collecting baseball cards. Until around 1996 when I got my license and became more interested in girls and music, baseball cards were one of my biggest hobbies. I still have almost all of my old cards and have passed them down to my son, a fellow baseball fanatic. We have a great time poring over my old cards (well, now they're his) as well as the new ones he collects. I'm instantly transported back to my childhood and all of the memories those cards bring back. What all of this is meant to be is my long-winded introduction to the new book by Brad Balukjian, The Wax Pack. Seeing as I'm the same age as the author and we both discovered baseball and baseball cards in the same year (1986), this book seemed squarely in my wheelhouse when I heard about it.

In the Wax Pack, Balukjian's premise is simple: he bought an unopened pack of 1986 Topps baseball cards, opened it, and set out to track down all of the players on the cards he got. Upon opening his pack of cards, doing some research on where the players in question now live, and reaching out to fourteen of the fifteen of them (the fifteenth person being the only deceased in the bunch), he set out in his car for the cross-country trek. From here, this is where the Wax Pack becomes more than just a book about old baseball players. The author started his journey in California, where he lives and works, with two friends as they checked the first couple of players who live in the state off the list. From there, Balukijian drove across the country solo in to discover not only what these former major league players did in their lives after baseball, but to learn about himself.


In the interest of not giving away too much I won't get into specifics, but I will say up front that I loved this book. First, the 1986 Topps series was the first that I collected so the nostalgia factor was in play from the start. It was also fascinating to see how forthcoming almost all of the former players were to Brad's request for a meeting and an interview. In many cases, they even invited him to meet their families, into their homes for meals, and along for the ride to do other activities. Most of the players in the Wax Pack were journeymen or second/third-tier players who the author mentioned were always his favorites as kid (he has a soft spot for underdogs) and so they weren't insulated from the rest of us by stardom. The highest profile player in the pack, Hall of Fame catcher Carlton Fisk, proved to be more elusive and refused all requests for an interview; the author had to get creative in meeting him (which made for one heck of a story!). Along the way Balukjian retraced many steps from his past, some painful and some poignant, reconnecting with an old flame and deepening his relationship with his father.

The Wax Pack project was as much a journey of Brad Balukjian learning about himself as it was catching up with old ballplayers. His writing style is engaging and easy to read and he's surprisingly candid about his feelings and his failings which makes the book as much a diary of his journey of personal discovery as it does hunting down old baseball players. It's a sports book, but it's also a travel journal and a classic American road trip book and it's a worthy entry into both genres. If you like interesting travel books, you'll like the Wax Pack. If you love baseball (and especially if you're of the same vintage as me and the author, or older) you'll love the Wax Pack. I highly recommend this book.