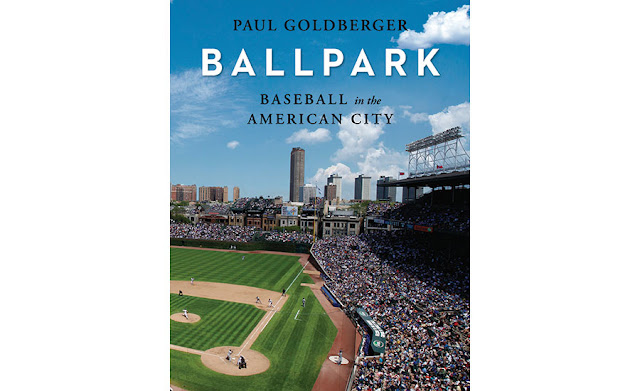 As a lifelong baseball fan, there's been a lot about the game beyond the play on the field itself that has captivated me. I've always enjoyed studying baseball uniforms and logos throughout history, but perhaps even more than that, it's been ballparks that I've always found utterly fascinating. This is partly because of how much I love going to ballfields and ballparks to watch games at any level, but also because ever since I was a kid I've loved tracing the history of where teams have played. The fact that ballparks, unlike football fields, hockey rinks, or basketball courts with their rigid and standardized dimensions, are all unique in their shapes, layouts, and dimensions beyond the infield has made them an endlessly intriguing source of study in my life. That's why when I learned about this book called Ballpark - Baseball in the American City being published back in May/June of 2019, I knew I had to check it out; for a ballpark geek me, it was right up my alley.

Regular readers of this blog will know that I have only reviewed music related books over the six-plus years that I've been reviewing books. I'm still reviewing those (although I've slowed down a lot recently), but I've also received numerous requests over the last year to increase my writing on baseball and I felt like this book was worthy of a review. Author Paul Goldberger is an acclaimed architectural writer, critic, and educator who is also a lifelong baseball fan. As such, Ballpark isn't a book that simply documents every major league ballpark, their dimensions, and the teams that play in them; instead it takes a more scholarly and nuanced look at these wholly and uniquely American structures. The main thesis running through the book is the idea of rus in urb, or the "country in the city." Tracing the roots of professional baseball back to the end of the American Civil War in the 1860s, Goldberger shows that part of the appeal of baseball fields and later, ballparks was to bring an element of the countryside into the rapidly industrializing and urbanized cities spreading across the country. The inextricable link between ballparks and their urban surroundings is also what led to each one of them having a unique layout as no two ballparks needed to fit into the same size or shape footprint within their cities. This is what led to such whimsical and instantly recognizable features such as Fenway Park's Green Monster, the terrace at Crosley Field, and the overhanging right field upper deck at Tiger Stadium. The author also traces the push/pull that ballparks have had with their cities, at first coexisting with their urban surroundings up until the 1960s when many of the classic parks were abandoned for more utilitarian (and for the most part aesthetically unappealing) monstrosities in the suburbs until ballparks started coming back into the cities in the early 1990s while adopting more of a "modern retro" look and feel. From the earliest wooden ballparks like Boston's South End Grounds with its majestic grandstand to the classic steel and brick ballparks like Ebbetts Field, Forbes Field, Crosley Field, Comiskey Park, the Polo Grounds, Yankee Stadium, Tiger Stadium, Shibe Park, and the only two that still remain in Wrigley Field and Fenway Park, ballparks were a vibrant and alluring part of their cities. The exodus to the suburbs in the 1960s led to bland dual-use monstrosities like Veterans Stadium, Riverfront Coliseum, and Shea Stadium (among many others, all virtually interchangeable) where baseball and football uncomfortably coexisted in venues that ideally suited neither. These concrete donuts, as they've been called for decades, coincided with the rise of automobile culture and increased mobility in American society but at the cost of an intimacy between cities, fans, and their teams. It wasn't until the early 1990s and the opening of the Baltimore Orioles' new "modern retro" Camden Yards that teams began to come back into their cities and adopt more traditional architecture for their new ballparks, although many modern accoutrements such as luxury boxes, open-spaced bar and restaurant areas, and themepark-like attractions like carnival rides and even artificial neighborhoods reflected the increased (and frankly, increasingly crass) commercialization of American cities.

Still, the story of ballparks and their relationship as structures relative to the cities they call home is a fascinating one and Goldberger writes in an engaging and informative manner that never seems heavy or overly scholarly. While he focuses more on the architectural merits (or lack thereof) of every ballpark currently in use as well as those from earlier in the twentieth century, there is a lot of warmth and humor in how he tells their stories. As for that story, it's not just about ballparks and their relationship to American cities, but also the story of the twentieth and (so far) twenty-first centuries. It offers an alternative lens through which the reader can observe how both the country and game of baseball have changed over that time period. Accompanied by numerous beautiful photographs of ballparks old and new throughout its three hundred pages, Ballpark is a must-have book for any passionate fan of baseball, baseball history, and ballparks.


I've also written a baseball book, A Win For Every Stitch, which chronicles the historic 2018 Boston Red Sox season from Opening Day to the end of the World Series. It will remind you of how great the game of baseball is no matter in which ballpark it's played. Click below to read all of the five-star reviews and then check it out for yourself...if you love baseball, I know you'll love it!