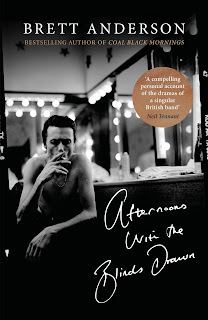 When I read and reviewed Brett Anderson's memoir Coal Black Mornings last year, I mentioned how he explicitly stated that he was ending the story of his life right at the moment Suede started to take off in 1991 because he never wanted to write a book about his life in the band. While that was a shame, it was certainly understandable as Brett and the band have always sat slightly outside and apart from the mainstream of music. He seemed intent on keeping the book to his pre-fame life and upbringing and I respected that. Since we already had the excellent authorized Suede band biography (which I reviewed several years ago), I was okay with his decision. Imagine my surprise (and delight) when I then learned last year that Brett had decided to write and publish a second volume of his memoir! The result is Afternoons With the Blinds Drawn, which picks up right where Coal Black Mornings left off.

Brett lets us know pretty quickly with the title of the first chapter ("The Book I Said I'd Never Write") that he somewhat reluctantly decided to carry on with his story. We should all be thankful he did because over the course of the book's ~250 pages he takes us through the entirety of the first phase of Suede's career, from the release of first single "The Drowners" in 1992 to that version of the band's final album A New Morning and their split in 2003. Along the way he doesn't resort to the typical rock memoir cliches of "we sold this many records" and "I did this many drugs" and so on, instead focusing entirely on his own life during those times. What went on around him in Suede is discussed, but as more of a backdrop to what was actually happening to him. Ever candid, Brett doesn't shy away from discussing both his successes as well as his failures; he goes into great detail about the disintegration of his friendship and songwriting partnership with Bernard Butler, his battle with a severe drug addiction in the mid-to-late 1990s, and the various songs and albums he's proud of (as well as the ones he regrets). The best bits are during these asides when he gets very personal, especially when he goes into detail about the songs he wrote for each Suede album. He doesn't go over every song, but when he does go into the details of his inspirations and memories of writing and recording them, it's priceless. He also doesn't only dwell on the ones he's proud of...the songs he's embarrassed by or wishes had turned out differently are given equal attention. Another aspect of the book which was much appreciated was his comparisons of the music industry and his experiences being in a band in the 1990s versus today. He admits that much of it is the perspective of hindsight and getting older, but his insights are nonetheless fascinating.

As to be expected from anyone who has read his lyrics (or his first book), Brett writes in a very florid, grandiose style. Sometimes it gets a bit verbose and delves into some self-parody cliches, but it's wholly unique and exactly what anyone with knowledge of his work would expect. Speaking of cliche, there's a bit of irony there since Brett was entirely self-aware to admit in the book that he often slipped into them with his lyric writing, especially in the late 1990s/early 2000s. Doubly ironic is that he tends to do that in this book itself (I lost track of how many times he used the phrase "demi-monde"). Still, these are minor quibbles for a book that was as enjoyable, enigmatic, and profound as the man himself.  Afternoons With the Blinds Drawn is a worthy and welcome "sequel" to Coal Black Mornings, and it also begs the question: a third volume finishing off his (and Suede's) story (and with either the word "Night" or "Evening" in its title) surely has to be forthcoming, right? I sincerely hope so.