BOOK REVIEW: Jimi Hendrix - The Day I Was There 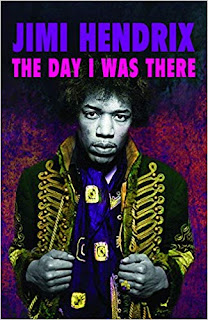 Astute and/or long-time readers of this blog will recognize that this is yet another entry into a series of books I've read and reviewed called "I Was There." So far I've reviewed "I Was There" books about the Who, Beatles, and Rolling Stones. This latest addition to the series concerns arguably the greatest and certainly the most influential electric guitarist in rock history, Jimi Hendrix. As is usual with these books, author Richard Houghton has collected and collated firsthand recollections from fans who saw Hendrix from his early pre-fame years all the way to his final concert in September 1970 a mere two weeks before his untimely death.


As is typical with this series, the book format is a chronological look at Hendrix' live career as told by the lucky fans who saw him in person. Starting with some of his pre-fame gigs, the book traces the story of Jimi's discovery in New York City in 1966 by Animals bassist (and first manager) Chas Chandler. After taking Hendrix with him to London in the autumn of '66, Chandler set about getting a band together for Jimi and securing a record deal. The earliest gigs played by the newly christened Experience are recounted in the book including the occasions where Jimi sat in with Cream. After the release of his first singles ("Hey Joe," "Purple Haze") and one of the greatest debut albums of all time in early 1967 (Are You Experienced?), Hendrix rocketed to stardom. It's interesting to see how quickly he graduated from playing at clubs and pubs in the UK and Europe to theatres and larger venues. His star really took off once he made his triumphant American debut at the Monterey Pop Festival in June 1967. From there to the end of his career, Hendrix was a megastar who was also one of the top grossing live acts of his era.

What's interesting in reading the fan recollections is that, as Jimi's career progressed, the change in his performance, as well as his appearance and demeanor, was noticed by the fans packing the arenas. Many of the memories in this book clearly state that they preferred his live shows from earlier in his career and that by 1969 and 1970 he was sounding (and looking) very ragged and worn out. It's interesting that even concertgoers were able to notice the effects of the music business (and his second manager, Michael Jeffrey) chewing up and spitting Jimi out as they worked him to the point of exhaustion in order to stuff their coffers. Reading through the concert memories also takes the reader back to a more innocent time when tickets were cheaper, seating was anywhere you found a spot, and it was easy to not only catch a moment or a word with Hendrix, but even hang out with him in many cases! Some of the fans who shared their experiences were wrong about songs played or events at the concerts they appeared at (corroborated by the numerous Hendrix bootleg recordings circulating), but with the passing of so many years (and the consumption of so many illicit substances in those days), it's understandable. More valuable are the concerts for which there are multiple accounts; while in some cases there are conflicting reports of what happened, in most there is corroboration of what was said or done (a particularly memorable concert from Wisconsin in 1970 instantly springs to mind after having read the book).

Jimi Hendrix: The Day I Was There is another fun entry in this series that will take fans who were alive during those heady times in the late 1960s back to their youth, while for those of us too young to have experienced it the first time, we can instead be transported back through the fan recollections. There isn't any new information about Hendrix or his music to be gleaned from the book, but that's not the point of this series. Instead, this book takes the reader back to a time when Hendrix was a completely new and unknown force on the music scene who reinvented what the electric guitar and rock music could do, one blown mind at a time.