BOOK REVIEW: Bring It On Home: Peter Grant, Led Zeppelin, and Beyond - The Story of Rock's Greatest Manager 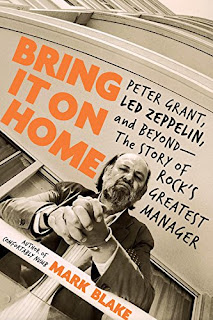 Everything about Led Zeppelin was larger than life: their music, their live shows, their stage outfits, their road excesses, and their manager. Like most great bands Zeppelin was guided by an effective manager, but in their case Peter Grant was anything but ordinary. For years Grant has been shrouded in as much mystery and mythology as the band he steered, known to fans mainly as an imposing gangster-like mountain of a man who was not to be crossed. Other than a scene in the band's film The Song Remains the Same where he's shown berating a promoter for allowing the sale of bootleg Zeppelin posters, what little fans knew of Grant was via the occasional photograph or interview. In the new book Bring It On Home, author Mark Blake aims to tell the real story of one of rock music's most notorious, influential, and misunderstood managers.


Mark Blake has written two of my band biographies, both of which I've reviewed previously on this site: Pretend You're In a War: The Who in the Sixties and Comfortably Numb: The Inside Story of Pink Floyd, so when I heard about his new Peter Grant book I knew I had to check out it. Written with the cooperation of Peter Grant's estate and his two children Helen and Warren, Bring It On Home aimed to pull back the curtain, sift through fact and myth, and show who Peter Grant really was. With access to Grant's archives and extensive interviews with his children, colleagues, friends, and drawing on multiple interviews Blake has conducted with the members of Led Zeppelin over the years, Bring It On Home does exactly what it was intended to do. Beginning with Grant's birth in pre-World War II London and his hardscrabble childhood, we learn about the family history that Grant spent his entire life hiding from everybody. After leaving school at fifteen, he worked various odd jobs including his first forays into show business by working the curtain at the Croydon Empire during the waning days of variety shows and the birth of rock and roll. After starting his own business driving musicians around to their appearances, Grant made his first steps into management with a handful of different pop groups throughout the early 1960s This eventually led him to the Yardbirds who Grant took over around 1967. It was also around this time that he started a joint management business and record label with producer Mickie Most. However, Grant was always smart enough to know that he knew nothing about music. What he did know was how to negotiate on behalf of his clients and how to get his way whether it was via negotiating or some other more persuasive techniques. During his early years Grant spent a lot of time watching and learning from the top impresarios of the day including the notorious Don Arden. By the time he took on the Yardbirds, he was able to improve their income while taking note of how much better their fortunes on the underground live circuit was in America versus how they fared on the British charts. In working with the Yardbirds, he also met the musician he would nurture and cater to for the remainder of his career, Jimmy Page. Out of the ashes of the Yardbirds rose the newly formed Led Zeppelin in 1968; the rest is history at least in terms of their career and it's a story that's been told numerous times by me and others. While I won't rehash it here, what Blake shows in his book is that Grant applied many of the tactics and strategies he picked up along the way in his formative years while pioneering new ones for better or for worse.

Bring It On Home doesn't shy away from discussing some of the more unsavory aspects of Grant's and Zeppelin's career including the drug use, the violence, and the tragedy. What the book does extremely well and which elevates it above a merely salacious tell-all is that the author also attempts to separate fact from myth to spell out the truth about Grant and his methods. Some of the most notorious Peter Grant stories are confirmed while others are corrected or dispelled. What's apparent reading through the book is that nearly everyone who befriended or worked with him for the most part remembers him fondly despite his flaws. What's undeniable is that he greatly improved working conditions and earnings for musicians with the numerous innovations he pioneered during Led Zeppelin's career. From demanding and getting a larger percentage of the take from ticket sales (90%!) to Led Zeppelin having complete ownership and control of their recordings and everything in between, much of what is taken for granted now in the music business is due to Peter Grant. Bring It On Home does a great job describing all of this as the backdrop to his life. There are even new tidbits of the Led Zeppelin story including insight on his relationships with Page, Robert Plant, John Paul Jones, and John Bonham. The story of Grant's life in the wake of John Bonham's death in September 1980 and the dissolution of Led Zeppelin is both poignant and enlightening as it somewhat confirms the conventional wisdom that he was a hermit from the public eye while showing that to his friends and family, Grant was more accessible as he simplified his lifestyle and improved his health. His untimely sudden death in 1995 ended his life but not his legend.


Bring It On Home is an excellent book and one of the rare biographies of a manager that's as interesting as the band they represented. Grant has always been an influential and controversial figure in rock history, but Mark Blake does a wonderful job at humanizing him and sorting through the stories and mythos in order to present who he really was behind the intimidating character clad in scarves, rings, and rumpled suits. For any fan of Led Zeppelin or 1970s rock, Bring It On Home is a great read about the successes and excesses of the biggest band and the biggest manager of that decade.