BOOK REVIEW: Thanks a Lot Mr. Kibblewhite - My Story (Roger Daltrey of the Who) 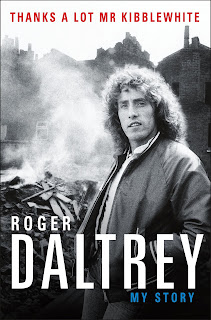 The Who are just a hair behind the Beatles as my all time favorite band. Their music and lyrics have meant more to me in my life than just about anyone else and their Quadrophenia album literally saved my life when I was a teenager. When I was learning to play the guitar and write songs, I wanted to be in the Who and listening to and watching footage of them live in their prime still gives me chills. They're one of the few bands I've read about and studied almost as much as the Beatles and for long time readers of this site, you'll remember all of the many different Who related books I've reviewed over the years. Two of my favorites were Pete Townshend's autobiography and Tony Fletcher's excellent Keith Moon biography. With the knowledge that John Entwistle never wrote a book and that no one has bothered to write a detailed biography of him (which is a shame), the only other book I ever wanted was a good one about Roger. A few years back I reviewed the only available biography on the Who's legendary frontman and singer and while it was serviceable, it wasn't terribly insightful or definitive. When I first heard more than a year ago that Roger was finally writing his memoir and that it would be released in autumn 2018 I couldn't wait. After a year of waiting and expectation, his book entitled Thanks a Lot Mr. Kibblewhite - My Story was released. While I found the title strange (until I learned within the book what it meant) I eagerly dove into the book to see if it would measure up to my expectations and how it would compare to Pete's book.

We all know that Pete and Roger are two very different personalities; that tension and dichotomy was part of what made the Who so great and that's borne out in their respective books even down to the writing style. While Pete is still very much the tortured genius who wrote in a florid, literary style, Roger is just the opposite. He's very secure in where and who he is and very straightforward. There's also a warmth and humor to his writing style that was evident from the first pages. The press release for the book stated that Roger sat down for interviews about his life and wrote the book himself based on that material. His life is presented chronologically starting with his birth in March 1944 during the final phase of the German Blitz of London in World War II.  From here he goes into some detail about his childhood in the waning years of the war, meeting his father for the first time once he was back from the fighting in Europe, and his relatively simple and happy childhood. Roger takes us through his miserable teenage years at school and it is here where we finally learn what the strange title to his book means. Mr. Kibblewhite was the headmaster who expelled Roger from school after telling him he'd "never make anything of your life." From here, Roger takes the reader through an abridged and breezy tour of his life, hitting on several highlights and lowlights but never going into too much depth. The bulk of the story is, of course, made up of the Who's career (and predominantly their "real" career of 1964-1978, but there's also a fair amount dedicated to their resurgent touring career of 1996 to the present). The other major thread running throughout the book is his marriage to Heather, his companion since 1968 and his wife since 1971.

Those looking for new information or a deep-dive look at Roger's life won't find it in this book. As opposed to a soul-baring memoir (see: Pete's book), Roger's feels more like an affectionate look back at all of the things he's accomplished in life. That's not to say that it's bad, it's just different from what I was expecting. Before I continue, I apologize for the repeated comparisons to Pete and his book, but as the two most high profile (and surviving) members of the Who, they're inevitable. Whereas Pete's book is like listening in to him laying on a psychiatrist's couch, Roger's is more like sitting in a pub having a beer while he tells stories from his past. This is helped by the warm tone and dry humor peppering the prose. It was a relatively quick read and at just over 240 pages not a particularly deep one. This isn't meant as a knock, though. Unlike Pete, Roger is a simple man and I am by no means implying that as a slight on his intelligence; while Pete was the musical genius behind the Who, Roger was a genius as well in his ability to get inside of the characters and emotions Pete wrong about to give them a life and a voice. Rather, I mean that Roger is an uncomplicated guy; he handles his problems, moves on from them, and doesn't hold too much resentment or regret over the majority of them (again, contrast this with Townshend). It would only stand to figure that his book would reflect this the way Pete's reflected all of his (Townshend's) neuroses. While it doesn't offer anything too deep beyond what most dedicated Who fans already know about the man, Daltrey's book is an enjoyable read and the portrait of a man who seems to be utterly at peace with his life, what he's accomplished, and where he is now. In a lot of ways, that's more interesting (and unusual) in rock and roll than the opposite. There were no great revelations in Roger's book, but I enjoyed learning about his perspective on his life and career and I'm glad those words straight from the man himself. If you're a Who fan I suspect you will, too.