BOOK REVIEW: Led Zeppelin: All the Albums, All the Songs (Expanded Edition) 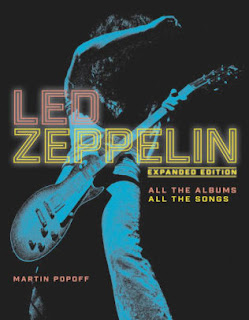 With 2018 being the fiftieth anniversary of the formation of Led Zeppelin back in 1968, there promises to be a slew of books and commemorations given their esteemed place in rock music history. On this site I've reviewed several books on the band as well as biographies of singer Robert Plant and guitarist Jimmy Page, but the new book Led Zeppelin: All the Albums, All the Songs is the first book dedicated solely to their music that I've worked on. Released in late August, the book is the expanded and final edition of author Martin Popoff's work detailing every Led Zeppelin song. In a similar vein to a well known Beatles book A Hard Day's Write (which I will review at a later date), Popoff takes a chronological look at every song the band recorded and released. This expanded edition includes previously unreleased bonus tracks from the 2014 Led Zeppelin remaster campaign as well as one-off tracks from their BBC sessions.


In his introduction, Martin Popoff starts off right away proclaiming his distaste for the Beatles and mentioning that he's written the most record reviews in the world. This got the book off to a bad start for me and no, it had nothing to do with his comment about the Beatles (I couldn't care less whether others like them or not). More than anything it was his writing style and tone which put me off from the get-go. In addition to the tone, a recurring annoyance with the writing that permeated the entire book from beginning to end was his awkward and stilted (and oftentimes downright incorrect) syntax. Another minor but recurring annoyance were the photo captions on each page. Most were correct (although a few were not), but all of them were simply lifted verbatim from the text of each entry. A small thing, I know, but one that along with the author's writing style really grated on me throughout the duration of the book. Just my personal opinion, but I figured I'd share it anyway.


As for the content of the book itself, it's a mostly pleasant trawl through the Led Zeppelin catalog, starting with "Good Times Bad Times" on the self-titled debut album and ending with "Wearing and Tearing" on Coda. There's a bonus chapter added to this edition of the book that adds sixteen "essential" bonus cuts that the author deems unique and/or important enough to be included. These are mainly fully realized one-off tracks like "Traveling Riverside Blues," "The Girl I Love, She Got Long Black Wavy Hair," "Swan Song," and the like. A few of them are outtakes that were included on the remastered albums from a few years ago, but overall I have no quibbles with the ones Popoff chose. The individual entries themselves are all one page with a handful of them stretching over two pages (usually for longer/important songs like "Stairway to Heaven" and "Kashmir," for example). Each song is given a synopsis of the inspiration behind it, some mention of where and when it was recorded, and fleshed out with the author's thoughts on its merits (or lack thereof). Any recording curiosities or anomalies are also noted (in a similar vein to another book I've reviewed, The Beatles Through Headphones). For the most part, there wasn't anything too revelatory in terms of new information that was brought to light, but there were some nice passages which helped put certain songs in context relative to the band's career and contemporary state of mind.  Overall, the book was a fairly enjoyable journey through Zeppelin's music although there were some things I disagreed with the author about. One was his assertion that Stephen Davis' Hammer of the Gods as a quality Led Zeppelin biography (it's decent enough but has serious problems). Also, there were numerous times I disagreed with his reviews of the songs themselves. For instance, he gushes on and on about "Celebration Day" being the greatest song the band ever recorded; I think it's a damn good song, but I can think of ten others off the top of my head that I would put above it in the pantheon of their best music. However, that's the nice thing about books like this: the author's opinion doesn't always have to jibe with your own and can often lead to lively debate either with yourself or others.


Overall, while the update of this book does feel a little bit like a way to cash-in on the band's upcoming fiftieth anniversary this October, it's also fun enough that if you haven't read it before it's worth checking out. One thing I deeply wish the publishers had invested in was a better editor because in addition to the horrendous sentence structure and grammatical usage, there were a LOT of typos and they got more numerous as the book went on. Perhaps the editor got tired the longer the book went on? In any event, this is a book Led Zeppelin fans should check out. You may or may not learn much of anything new but you'll enjoy it and it will inspire you to listen to their albums as you go through each entry. That was the best thing it did for me.