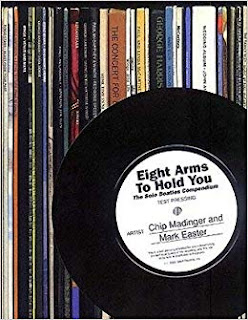 For as many books as there have been written about the Beatles as a group, there have been almost as many written about the individual members and what they did after the split in 1970. While most Beatles books focus on the lives and music of the four men, a handful are more like day-to-day guides to their activities during the post-Fab Four period. There are two indispensable books from Mark Lewisohn, The Beatles Recording Sessions and The Complete Beatles Chronicle (both of which I will review at a later date). As for the solo Beatles, there's only one book that merits comparison to those two: Chip Madinger and Mark Easter's Eight Arms to Hold You. Published in 2000, the book immediately became a bible for fans and collectors of John, Paul, George, and Ringo's solo work and activities. My personal copy has been well worn and sits proudly on the shelf in my library. The impetus for this review was the news that an updated version of the book is due to be published on August 1st of this year. That was enough to spur me to re-read the book and write this review.

Containing a whopping 718 pages, Eight Arms to Hold You is laid out with a section devoted to each individual Beatle. Within each section, their solo activities are presented in chronological order from their first baby steps into solo work in 1966 through the band's breakup in 1970 all the way up to 2000 (or in John's case, up until his murder in 1980). Contained within each section is literally everything that each of them was up to during that time. This includes not only recording sessions, but also radio and TV appearances, interviews, concerts, music videos, and everything in between. Looking at the amount of detail that has gone in to the book is staggering as no stone was left unturned. Each entry has a synopsis of all the pertinent information there is to report. Also, for every single and album release there is detailed information including catalog numbers, track lists and times, reviews of each song, and notes on subsequent versions. In that way, this book also acts as the definitive solo Beatles discography (at least up to the year 2000). Beyond that, there's a wealth of information pertaining to bootlegs and unofficial releases. Some of the most revealing and fascinating bits, for instance, are the authors' accounts of John Lennon's diary tapes from his reclusive late 1970s years. The descriptions of what's on the tapes are frankly a bit upsetting, but all of it is interesting and acts as good motivation to seek out this and other similar material.

As I mentioned before, the amount of research that went into this book was clearly huge. If you're familiar with Chip Madinger's more recent book on John and Yoko, LENNONOLOGY, which I've previously reviewed then you will understand the amount of information and detail contained in Eight Arms to Hold You. One of the nice things about both books is that they can be enjoyed in a variety of ways. They can be read front to back in chronological order or used as a reference guide. I've done this with both books. After first reading through from cover to cover I continue to use Eight Arms to Hold You as a reference book, pulling it off the shelf and flipping to whichever section I'm interested in to answer any questions I have. My one and only complaint with the book is that it stops at 2000, but I was really excited to hear about the new edition being released in August. The authors describe it as a "remastered" edition where a few things have changed. The book hasn't been updated with any post-2000 entries. Rather, they've first gone and fixed any typos or printing errors that were present in the original version. Then, they've used the new information they've unearthed in the ensuing eighteen years and updated/corrected/enhanced the entries. The result will be a refreshed version of the original book as described by the authors on their site (you can purchase it there as well). The nice thing is that this new version will be available for download immediately upon release. This is good news for anyone interested, especially those who doesn't already have a copy of the original; the book is out of print and fetches some ridiculous prices on the secondary market (if you want to see how much, click on the link below. And no, I'm not planning on selling my copy!).

In short, Eight Arms to Hold You is the best guide to everything the four solo Beatles did in their brave new post-Fabs world. I've recommended this book a ton on message boards over the years and I'm continuing to do so here. You won't be disappointed.