Once Again, the New England Patriots are Champions! 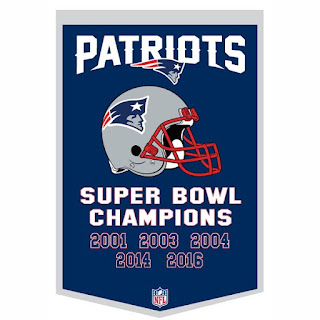 (I'd meant to finish writing this and post it the day after the Super Bowl, but life got in the way as it usually does, so here it is a week late but no less relevant, especially if you're a fellow Patriots fan!)

As you all know, I've been a massive fan of the Boston sports teams for my entire life. Having been born in Massachusetts and spending my entire life in New Hampshire from the age of 3 until I moved to Pennsylvania two years ago, it's in my blood. The Red Sox, Celtics, Patriots, and Bruins have been my favorite teams since before I can remember and I'll support them until the day I die. I'm 37 years old and for the first 21 years of my life, I hadn't seen much greatness from my teams. Apart from the Celtics, who were one of the dominant NBA teams of the 1980s and won 3 titles in 5 Finals appearances during my childhood, the rest of the teams only gave us heartache. The Red Sox lost the 1986 World Series in crushing fashion, a collapse so bad that even despite the three titles they've won since 2004 I'm still scarred. The Bruins lost in their two Stanley Cup Finals appearances in 1988 and 1990, and the Patriots...let me just say that for anyone under 30, you have no idea how bad the Patriots used to be. They were the laughing stock of the NFL and apart from a Cinderella run to the Super Bowl in 1986 (where they promptly got crushed by the historically great '85 Chicago Bears), being a Patriots fan meant cheering on a perennially losing organization. The low point was when they came a hair's breadth from moving to St. Louis before Robert Kraft stepped in, bought the team, and started to invest money in the team, players, and coaching staff. Still, we cheered for them. Because of this, the past sixteen years of dominance have been especially sweet, but I think the Pats may have topped all of the great moments of the past with their recent victory in Super Bowl LI last week.

Going back two years ago, I wrote that their victory over the Seahawks was the greatest game I'd ever seen. I still think it was one of the best games I've ever seen, but at least right now the latest championship won by the Patriots takes the cake. After they trailed 21-0 to the Falcons in the second quarter, I didn't see how they could possibly win. The nadir was when the score was 28-3 midway through the third quarter...surely the team with the best record during the regular season couldn't go out like this, even to a supremely talented team like the Falcons? My only wish at that point was for them to score a few times to at least make it less of a blowout, but then they began to chip away at the lead little by little, their defense turned up the heat, and suddenly it was a game! I won't bore anyone with the details because if you watched the game, you don't need me to recap it, but when the Patriots completed the comeback to tie the game with less than a minute to go, it just felt like they had 100% of the momentum and that there was no way they'd lose the game. As soon as they got the ball in overtime, I knew it was over and they didn't prove me wrong with their historic 34-28 victory, completing the biggest comeback in Super Bowl history (a record they previously set two years before). As sweet as the game was for myriad reasons (including sticking it to Roger Goodell and the NFL), it was extra satisfying because with Julian Edelman's incredible catch late in the fourth quarter, we finally had a freaky fluke catch go our way after being on the wrong end of them in our previous three Super Bowl appearances. (Two of these completely flukey catches are the only reason the Patriots have five championships and not seven). The other cool thing was that after the game, a lot of my friends who are non-Patriots fans (or even Patriots haters) texted me to congratulate me on the game, and when I wore my Pats hat out and about in the days following, fellow Pats fans and even fans of other teams stopped me to talk about the game. That's one of my favorite things about sports, their ability to bring people together to talk and enjoy them even if they root for different teams (of course, this aspect can also lead to petty disagreements and trolling behavior on the internet, but let's just focus on the positive here).

I know that as a Boston sports fan, I've been spoiled over the last twenty years and that our teams and our fans are hated by most of the rest of the country, but I make no apologies. I've been following these teams my entire life and intend to do so until I die. With that in mind the Patriots latest Super Bowl victory is something I'll never forget. This run of success, spearheaded by Bill Belichick and Tom Brady, is something I'll likely not see again in my lifetime, so I plan to savor every moment of it. These are the kind of times any sports fan wishes for their team, and I and the rest of Patriots Nation happen to be fortunate enough to have witnessed this from 2001 to the present.  Like I keep telling my kids (all of them Patriots fans as well...was there ever a doubt?), enjoy this because it's not normal for a team to be this good for this long. I know I will, and the Patriots winning their fifth title in Super Bowl LI is the latest in a long line of sports memories I'll always remember.