BOOK REVIEW: I Was Britpopped 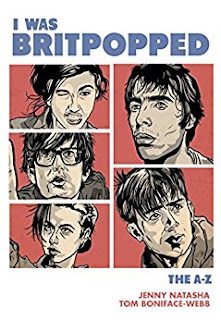 I've always believed that the 1990s are second only to the 1960s as rock music's greatest decade. I'm sure some of you will accuse me of feeling this way because I grew up during the decade and these were my prime formative years, at least in terms of music since I was 10 when the 90s began and 19 when they ended. In my opinion, the 1990s were a great decade for a variety of reasons, mainly because it was the only decade other than the 1960s where there was a vibrant, exciting, and quality scene on both sides of the Atlantic at the same time. Between the alternative rock scene in the US and the indie/BritPop scene in the UK, bands were once again writing and recording music that captured the spirit of the times and pushing boundaries in the studio and on stage in a way that sadly hasn't been done since 2000 or so. It was the last decade when rock and instrument-based music was dominant, before rap, pop, and programmed music written by teams of songwriters became the industry norm. In the new book I Was BritPopped: The A-Z of BritPop, authors Jenny Natasha and Tom Boniface-Webb have presented the decade in British music in the form of an alphabetical guide to the bands, albums, singles, TV shows, and fashions that defined Cool Britannia and the entire movement.


***special thanks to the authors for sending me a copy of the book to review!***


As explained in the book's introduction, I Was BritPoppped was designed to not only be read front to back, but to be used as a reference where entries can be immediately turned to when information is needed.  The book doesn't cover the entire decade, but rather the core years of ~1992-1998 which corresponds with the movement's birth, peak, and decline. Understandably, the bulk of the book is dominated by the giants of BritPop: Blur, Suede, Pulp, Elastica, and Oasis. The numerous quality second and third tier bands like the Bluetones, Mansun, the Verve, Ocean Colour Scene, Supergrass, and more are well represented, while loads of one-hit wonders and bands at the margins of BritPop who did little more than cash in and ride the wave for a fleeting taste of fame round it out. I have to say that the breadth of what the authors covered was impressive, as I've always considered myself quite knowledgeable about the movement (especially for an American) yet there were plenty of lesser bands I'd never heard of.

Overall, this was an enjoyable book and a nice way to stimulate memories of the music from that era, much of which I still regularly listen to while a lot is stuff I haven't heard in years. By focusing on only the most relevant artists and releases and limiting the singles to those that were either culturally significant or charted in the Top 20, the authors prevent the book from getting too long and unwieldy. However, there were some problems I did have with the book. These mainly had to do with numerous typos and printing errors found throughout. The writing style could have been cleaned up and the flow and syntax improved. It simply seems that an additional edit of the entire book was in order. Finally, there were some glaring factual errors that irritated me a bit, the two biggest being when the book stated that Suede keyboardist Neil Codling is singer Brett Anderson's cousin (he's drummer Simon Gilbert's cousin), and that the Rolls-Royce in the swimming pool on the cover of Oasis' Be Here Now album is a tribute to Keith Moon because that's how he died (he actually died from an overdose of anti-alcoholism pills while sleeping in his apartment). Little details like these might not matter to casual readers who may be unaware, but for an obsessive (and some might say excessively so) music fan such as myself, these stuck out like a sore thumb. There also were just too many of the marginal/worthless bands who did little more than latch on to BritPop for a bit of fame at the expense of some more entries from the titans of the genre. In particular, while I understand why the authors wanted to keep the book confined to the core years of the scene, I do wish they'd made some exceptions for the heavyweights like Blur, Suede, Oasis, etc and discussed the albums they made both prior to (if applicable) and after (ditto) the movement ended in order to shed some light on how these bands adapted (or didn't) once the music had moved on. However, besides these criticisms, this is a fun book and well worth the read for anyone around my age who lived through those years, loved the music that came out of the UK in the 1990s, and still carries the flag for BritPop two decades after the movement peaked. It's good for an initial front to back reading before settling in as a fun reference book for future use.