BOOK REVIEW: The Beatles and the Avant Garde 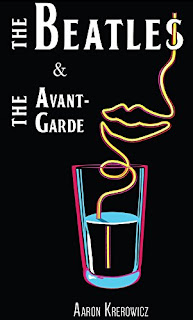 Innovation in music and recording/audio production were part and parcel of the Beatles' groundbreaking approach to rock music in the 1960s; it was as much a part of their appeal as was their exceptional songwriting and musicianship. However, another aspect to the Beatles' success and the longevity of their music was their constantly changing sound; never content to recycle a successful formula, the Fab Four were always pushing forward for new sounds, new approaches, and new ways of communicating. This resulted in the Beatles going "a bit funny," as the Queen of England was supposedly quoted as saying to Brian Epstein in 1967 or so (whether this is apocryphal or not, it's plausible and quite humorous!).  But the Beatles "going funny" wasn't just a matter of the band expanding their consciousness with drugs the way everyone did back in the 1960s...rather, it was a very deliberate and conscious attempt at utilizing all of the outside influences that were exploding all over the arts scenes on both sides of the Atlantic. In particular, it was the avant garde artists, writers, and musicians of the era that influenced the music of the Beatles during their peak period of 1965-1968. In the new book The Beatles and the Avant Garde, author Aaron Krerowicz takes a scholarly look at the avant garde figures whose works crept into the Beatles music and how exactly they manifested themselves in their songs.

Aaron Krerowicz is the only full-time Beatles scholar in the USA and as such, has spent a fair amount of time researching the band from multiple angles. For this book, he has decided to investigate the avant garde influences that colored their music during the period spanning the middle to the end of their career (~1965-1969).  In the introduction, he lays out the format of the book in that it will have in-depth looks into the three figures whose avant garde leanings most impacted the Beatles' music: Paul McCartney, John Lennon, and Yoko Ono, to each of whom a major chapter is dedicated. Additionally, there are minor chapters on the two peripherally avant garde figures in the Beatles story, George Martin and George Harrison. It was nice to see that the author acknowledged that, contrary to forty-plus years of conventional wisdom amongst the public, it was Paul McCartney and not John Lennon who was not only the first of the Beatles to become interested in the avant garde, but was also the one who was most fully committed and knowledgeable about it. The chapter on Paul explores his earliest forays into the avant garde via the books he read, the lectures and concerts he attended in London, and the home experiments he conducted both with music and film. There's further discussion on how and when these influences showed themselves in Beatles music (most notably in the still-unreleased and Holy Grail early 1967 recording of "Carnival of Light") and how he has continued to flavor his music with these influences to this very day. The chapter on John is much the same, although as I mentioned above it was refreshing to see it stated, backed up with facts, that John was late to the avant garde party and followed in Paul's footsteps. Additionally, as with most things in his life, the (self-admitted) short attention span of Lennon's made for a full-on immersion into the avant garde with his various joint-vanity projects with Yoko Ono in 1968 before disappearing altogether by the time the Beatles split in 1970. Ono's chapter is quite interesting as, of the three, she was the most committed to the avant garde almost from the beginning of her career and continues to be to the present day...for her, it wasn't a way to shock or challenge people so much as it was simply her preferred way of communicating via her art.

Interspersed are two shorter chapters on the two Georges of the Beatles legend, Martin and Harrison. While the chapter on George Martin shows how he was interested in off-beat and somewhat avant garde comedy recordings even before he started working with the Beatles in 1962 and how, with this background, he was the perfect producer for them, the chapter on Harrison is a bit lighter in substance. George was always the most skeptical Beatle when it came to the avant garde (or, let's be honest, anything), famously quipping that he called it "avant garde a clue." Apart from his semi-plagiarized experimental album Electronic Sound from 1968, George was not avant garde at all, although I've always found it ironic how, on the two most avant garde Beatles songs ever recorded ("Revolution 9" and "What's the New Mary Jane") the only other Beatle to join John and Yoko on both was...George Harrison! There's no chapter on Ringo, and while I suppose it's understandable since, as the author mentions early on, he was the least involved Beatle in the songwriting process, I feel as though he could've been included in the chapter discussing George. While probably only known to hardcore Beatles fans, Ringo did dabble in some avant garde experimentation, most notably in the seven minute collage of tape loops and effects he created with John on the extended and unreleased version of "Flying," as well as the various effects and noises he peppered the famous (and personal favorite of mine) bootleg of early White Album mixes, the Peter Sellers Tape.  Including these would have beefed up the chapter on George Harrison a bit and covered all of the bases when it comes to avant garde Beatles, in my opinion.

Overall, this is a nice little book that is well written, easy to read, and quite informative. Anyone looking for in-depth discussion of Beatles music won't find it here, as the most detail is given to the various avant garde figures themselves and the works that influenced the Beatles' music. The book was well researched and has detailed footnotes to all references cited, although at times it felt more like reading a final university term paper than a book. While Beatles fans looking for florid discussions of their music will be disappointed, anyone who wants a scholarly look at the reasons for their music getting "weird" in the mid-1960s will enjoy this dig below the surface into how the avant garde tinged some of the greatest songs of the 20th century.