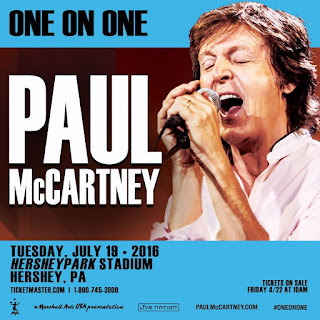 Well, here's something I never thought would happen since my family moved a couple of years ago! One thing I was disappointed in when we left New England and came to central Pennsylvania was the fact that we went from having a world-class city an hour away to being sort of in the middle of nowhere. This was especially true when it came to my beloved live music...let's face it, just about everybody, no matter how big or small, plays in Boston. But who the heck comes to central PA?

We live about five minutes away from Hersheypark and have seasons passes. It's a lot of fun and a great place to take our kids; because we're so close, it's easy to take them for a few hours every couple of days throughout the summer. The park also has two major concert venues, the Hersheypark Stadium and the Giant Center arena, where major acts regularly come play. However, in the two years we've been here, they've been mostly country or pop artists, none of whom I've personally been interested in, although my wife has seen a few shows by some of her favorite acts here. I've actually gone back to Boston to see shows I wanted to see in the past two years!

That all changed two weeks ago, though, when Paul McCartney was announcing his forthcoming summer dates for his One on One Tour. When I saw that he was announcing a new concert each day, I thought to myself "wouldn't it be great if he played here? Fat chance of that ever happening, though!" Later that evening, my wife asked me if I'd seen Hersheypark's Facebook post from earlier in the day. When I said that I hadn't, she showed me and I just about fainted: it was a picture of a Hofner bass guitar propped up on the Hersheypark carousel with the caption "One on One." So Paul was going to be actually playing here? I couldn't believe it, especially as I'd literally had that off the cuff thought about it earlier that day! Fast forward to yesterday morning, and utilizing one of the perks of having been in his fanclub for the last several years, I was able to score two floor seats for the concert via the fanclub presale. It'll be my second time seeing Paul (my first was three years ago in Boston) and my wife's first. I'm really excited to be able to share this with her because she's a huge Beatles fan like me and I just know she'll love the whole experience. Being able to spend that time together with her and listening to music we both love dearly will be one of the highlights of my life.

The neighborhood where my house is sits up on a hill above Hershey a little bit and I often tell people that I can see Hersheypark from the end of my driveway (which is true). Now, I'm going to be able to see Paul McCartney in a place I can see from my house. It still seems a bit surreal but damn, will it be fun!
concert fun music Paul McCartney personal upcoming