BOOK REVIEW: Complicated Game: Inside the Songs of XTC 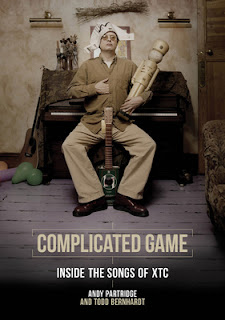 In 1998, a book by longtime XTC fan and friend Neville Farmer called Song Stories was released and quickly became one of my favorite books. A song-by-song look at the entire XTC catalog, as well as a band history, all told with the band's input, I'd probably read it a half dozen times since I bought it in '98 and when I wrote my review, I was very complimentary in my assessment. However, an interesting thing happened when I tweeted out a link to my review...Andy Partridge himself replied to it! In his response, he complimented me on the review but said: "Don't like the writing. Feel we missed a good opportunity, Farmer too sarky (sarcastic) we thought. Never saw a penny." Around this same time, I had caught wind of a forthcoming new book that Andy alone was involved in along the same lines of a song-by-song analysis. I would've wanted to read it anyway, but given Andy's opinion of Song Stories, my curiosity was piqued even more. That book, Complicated Game: Inside the Songs of XTC, came out a few weeks ago and is the subject of this review.

***special thanks to Tom at Jawbone Press for sending me a copy of the book to review!***

Author Todd Bernhardt is an XTC fan and writer for Modern Drummer who, over the course of several years, interviewed Andy about each song he wrote during of XTC's career, the results of which were published on the superb Chalkhills XTC fansite. Todd and Andy went through each and every XTC song Andy wrote, nearly one hundred of them. Thirty of these were chosen for Complicated Game, which Bernhardt fleshed out and updated with additional interviews with Andy. Starting with one of the band's earliest singles, "This is Pop," and working its way chronologically through to their final album, Wasp Star, each song gets its own chapter and is set up as a dialogue between the author and Andy, with Bernhardt's questions and prodding being answered by Andy with his trademark wit and humor. Drawing upon his memory as well as his extensive songwriting notebooks dating back to the very beginning of XTC's career, Andy offers his insights into the songs, ranging from what inspired him to write them to the sounds and techniques used in the studio to record them.

One of the things that's always made Andy Partridge such a great interview subject is how funny he is, as well as his extensive knowledge of rock history and all of its minutiae (his knowledge of such small and obscure details is even deeper than mine, which I find very impressive!). Beyond describing why he wrote the songs, Andy discusses how he stumbled upon many of the chord patterns and riffs; this could range from him detailing the chord sequence to telling Bernhardt which song he was playing on guitar (i.e. "Summertime Blues" in one example) when he stumbled upon the idea for something new. He explains his thought process as he worked on the songs, and even better, discusses a lot of the technical aspects of how they were then subsequently recorded and produced in the studio for the albums. Throughout the course of these discussions, Andy goes off on many tangents, some related and some wildly unrelated, but always very entertaining, enlightening, and uniquely Partridge. For the most part, Bernhardt does a good job of directing the discussion back to the song at hand although in a few cases, they both seem to get off piste and too wrapped up in their side discussion that it can get a bit distracting. The book ends with a chapter of Andy discussing his approach to songwriting, which as a songwriter myself, I found incredibly informative and illuminating. I always like to learn from those who have mastered a craft and Andy was deep and profound while still being relatable and easy to understand. A fine way to end the book, I thought.

If I have any gripes with the book, they're fairly minor although still a bit nagging. First and foremost, as a massive XTC fan, is that I just want more songs to be discussed! Andy is so interesting and enjoyable to listen to that I would have gladly hread about an additional thirty songs had they been included in the book...sure, it would've made the book even longer than its already hefty 400 pages, but what's wrong with that? On a more serious note, though, the cherry-picking of which thirty songs were discussed in the book baffled me a little bit. While I'm sure any fan could nitpick why certain favorite songs of theirs weren't included, some rather big and important XTC songs weren't included in the book while some more obscure, rare, and honestly weaker ones were. Also, because the author did conduct interviews with Andy for every song, it's a bit strange to hear some of their discussions allude to information in a way in which it would make perfect sense to the two of them, who know what they talked about elsewhere, but not for the reader. Along these same lines, Andy is a bit repetitive in some chapters, saying exactly the same thing about matters pertaining to multiple songs (i.e. if they're from the same album or general time period). Certainly not his fault, but perhaps a bit of editing would have tightened this up. Finally, there were quite a lot of typos and syntax errors that appeared to be more the fault of an editor than the writer himself...nothing too glaring although definitely noticeable. Ditto for some factual errors in a few of the footnotes.


Keeping Andy's opinion from his tweet to me in mind, I really enjoyed this book. However, I don't think it outright replaces or obsoletes Song Stories. I think that, for a true biography of XTC and a look at their overall song catalogue, Song Stories is still the go-to resource despite its shortcomings. Complicated Game is a fantastic companion piece, though, which allows Andy to go into greater detail about many of the songs discussed in the prior book and I think that any XTC fan needs to have both books in their library.