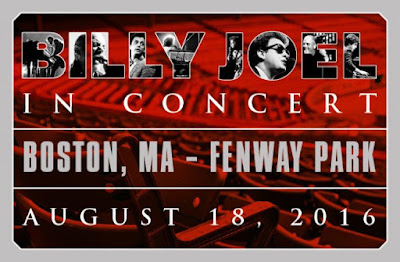 My musical bucket list of "must-see" bands/artists to see at least once in my life looks something like this:

Now, this list isn't to imply that these are the ONLY bands I want to see; rather these are the ones that I absolutely want to do whatever I can in my power to see at least once before they (or I) leave this mortal coil. On that list above, I've seen all of the ones in green at least once except, while the ones in red I've yet to see: the Stones (hopefully soon), Clapton (unlikely as he basically retired last year), the Davies brothers (Dave has played agonizingly close by several times in the last two years but I haven't been able to catch him), and Billy Joel. However, as you can see from the title of this post (and that picture of those two tickets in my hand), I'll be crossing Billy off my list by the end of the summer. Mrs. Chemist and I will be going to see Billy at Fenway Park, where we've seen loads of Red Sox games over years, but not too many concerts...it'll be my second show there (I saw Paul McCartney there in 2013) and my wife's first. We're both big fans of Billy...personally, I've been a fan my entire life, and everyone I know who has seen him says he still puts on a fantastic show, so to say I'm excited is a bit of an understatement, plus it gives us an excuse to go back home to New England for a few days (which is never a bad thing). When it was announced by the Red Sox a few weeks ago that he'd be playing at Fenway for the third summer in a row, I just knew we had to go see him. Luckily, I was able to score tickets right after they went on sale a couple of weeks ago.

As if you ever doubted it, I fully intend to write up a review of the concert and the entire experience for this blog after the fact, but in the meantime I now have something to look forward to for the end of the summer.