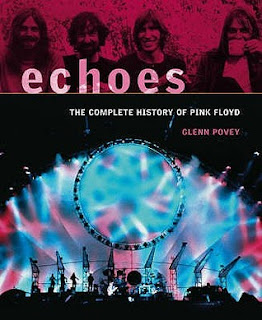 Similar to all-encompassing chronicle books on the Kinks (All Day and All of the Night, which I've reviewed previously) and Beatles (The Complete Beatles Chronicle 1962-1970, a book which I've owned for years and intend to review in the future), author Glenn Povey has spent years researching and writing a comprehensive day-by-day diary of Pink Floyd's career. Spanning the births of the band members through the band's official 1965 founding all the way up to 2006 (when it was published), Echoes documents every concert, recording session, single and album release, television, radio, and promotional appearance made by the band over their long and successful career.

***special thanks to Meaghan at Chicago Review Press for sending me a copy of the book to review!***


The book is laid out in similar fashion to the aforementioned Kinks and Beatles books, moving chronologically forward year by year with entries for each appearance by date. Split into distinct eras of Pink Floyd's career, the beginning of each chapter consists of long and detailed write-ups describing the band's activities during that time period, accompanied by numerous photographs or the band and various bits of memorabilia. Following the chapter introductions, the entries themselves contain as much information as Povey was able to uncover in his research, and the amount that is included is rather impressive. Beyond set lists for the concerts, rehearsal times, track lists, and broadcast dates for the TV and radio appearances are included, as well as track and session notes for Pink Floyd's recording sessions. These entries include, when applicable, contemporary reviews from prominent newspapers/magazines/periodicals of the times, shedding an interesting light on how Floyd's music, both on record and in concert, was initially perceived. It can make for some fascinating reading, especially when reviews back then contrast so sharply with retrospective analysis (in particular, I'm recalling the scathing 1975 review for the Wish You Were Here album which was included in the book, especially when it's compared to modern views of the record). Also, it's interesting to see that certain obscure songs were actually played onstage, including some you'd never even consider, such as "Alan's Psychedelic Breakfast" at the tail end of 1970! The book does a good job showing just how relentlessly punishing and grueling Pink Floyd's concert itinerary was up until the end of 1973, as well as how little they actually toured from 1974 onward. The book's timeline ends with the final ever Pink Floyd concert, their 2005 reunion for Live 8, and the death of founding member Syd Barrett in 2006. Short diaries of the solo careers of all five Pink Floyd members follow, and the book concludes with a comprehensive discography.

There's not too much more that can be said about a book like Echoes...these type of day-by-day chronicle books can either be done extremely well or they can come off as shoddy, poorly researched jobs. Echoes continues in the tradition of the Kinks and Beatles books mentioned earlier as one of the very best. The amount of research the author put into the book is staggering, especially considering what he was able to dig up for the band's early years when they had a loosely held together, constantly rotating membership and changed their name as frequently as their socks, playing various small student gatherings and underground gigs before solidifying into Pink Floyd in 1965. Echoes is readable from front to back, but it's also quite useful as a reference book; just pick a years or event of interest, flip to that section, and the information is right there at your fingertips. Echoes is a valuable and informative tome that is essential for any Pink Floyd fan, especially its value as a comprehensive reference for collectors of the band's live and promotional work. A few minor typos aside, this book is as good a day-by-day chronicle of Pink Floyd's history as there ever will be and is worthy of being on any Pink Floyd fan's bookshelf.