BOOK REVIEW: The Who: 50 Years of My Generation 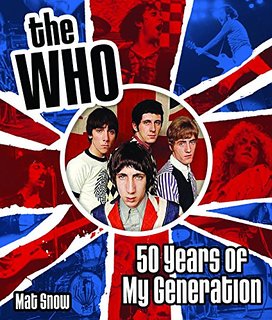 Released almost simultaneously alongside the official Who 50th anniversary book which I reviewed last month, veteran rock music writer Mat Snow brings us another book celebrating fifty years of one of the world's greatest rock groups. As you can see from my review, I was quite disappointed with the official book and so was interested in seeing whether or not an unauthorized overview of the Who's entire career would fare any better. I'm familiar with Snow's work over the years, including his book set on the Beatles' solo careers which I reviewed a couple of years ago. That set was fun if not lightweight and riddled with errors, so I was slightly wary when diving into his new Who book. While it's not perfect and suffers from many of the same maladies that his solo Beatles book did, I am will say upfront that it's much more enjoyable than the official book.


***special thanks to Steve at Race Point Publishing for sending a copy of the book to review!***

When I first heard that book was titled 50 Years of My Generation, I initially thought it was going to be a celebration of the 50th anniversary of the Who's debut album, also called My Generation and released fifty years ago in December 1965. Moving past the somewhat confusing title and realizing that it's actually a book celebrating the band's entire career, it's laid out in much the same way as the official book: chronologically beginning with the band members' births at the tail end of WWII in London and their youth spent during the post-war austerity years of the 1950s before rock and roll arrived in 1956 and changed everything. From here, the book travels the well-known path of previous Who books, following their career as a struggling covers band before Keith Moon replaced their original drummer in early 1964 and Pete Townshend took creative control over the band's music and message. Snow navigates their career through the heady days of the 1960s, the Who's ascension to legendary status in the 1970s, their limp to the finish line in the early 1980s in the wake of Moon's 1978 death, and the endless run of reunion tours that continues to the present.

Along the way, the chapters include a linear narrative of their career through each era, accompanied by photos of the band, concert tickets, programs, and other related images. While there were several images that were new to me, most have been seen many times over the years although they were reproduced in excellent quality. What was jarring about the entire experience, however, was that many paragraphs and photographs that would have fit better in the previous chapters were inserted out of sequence. As one example, in the middle of the chapter about the recording of Tommy in 1969 there would be a paragraph and accompanying photograph about something that happened in 1968 that was unrelated and should have been in the previous chapter. There were also several typos: many were just honest editing mistakes such as missing letters or slight misspellings, while others were flat out errors (such as discussing the recording of John's bass solo in "My Generation" but calling the song "Anyway, Anyhow, Anywhere"). A few of the photographs are miscaptioned as well, most egregiously a shot of Pete onstage in 1980 labelled as being from 1990 (the vast difference in the amount of hair on his head should have tipped the editors off!). These mistakes are minor, but there are enough of them scattered throughout the book that they add up after a while.

Overall, though, this book is enjoyable. I certainly had more fun reading it than I did the official history, although I do want to emphasize that 50 Years of My Generation is still not perfect. In addition to the shortcomings mentioned above, the book generally doesn't contain any new revelations or information that would necessarily appeal to any hardcore fan who is deeply knowledgeable about the band. It really is just an broad overview of the band's entire career, not particularly in depth although far more enjoyable to read than the official book.  Much of this is down to Snow's writing style which, while a bit simplistic and clumsy in its construction, definitely conveys the excitement and enthusiasm of a real Who fan as opposed to the more cut-and-paste feel of Ben Marshall's prose in the official book. One thing I certainly noticed was his disdain for the short period of time after Keith died when Kenney Jones was their new drummer. While anyone who knows me knows that I am outright dismissive of any of the post-Moon work the band has done and that I can't stand the music they made with Kenney Jones (apart from one or two songs), Snow came off quite harsh in both his narrative and photo captions. While I certainly agree with his sentiments, I also don't place all of the blame for the downward spiral in the Who's quality once Keith died at Kenney's feet...they were a spent force and Pete saved his best songs for his solo albums. Fairly or not, Kenney became the scapegoat and while I didn't mind Snow's tone, I can see how some fans who like the music from that era of the band's history might take umbrage with the author.

In closing, while this isn't a perfect book, I definitely rank it higher than the official one; some of this is down to the tone and content, and some is because of how truly and utterly disappointing the official book was. While that book had a cleaner, more mature look and feel to it, 50 Years of My Generation is bold, colorful, splashy, and loud...all adjectives that can be used to describe the Who themselves and which convey the excitement and fun of their music and career. If you need to choose between one of the new career retrospective books released for their 50th anniversary, I would recommend this over the official as it's far less frustrating and a lot more fun.