Every year when this day pops up, I get a little bit sad. Today is, of course, the day in 1980 when John Lennon was needlessly, shockingly, and cruelly taken from us for reasons we still cannot comprehend other than the fact that it somehow made sense in the mind of a madman. I've written about how John's death (as well as George's, which was fifteen years ago this past couple of weeks ago) has affected me, but I was moved to write a little memory of it on a message board that I frequent and I thought it was worth sharing here as well.

I wrote: "I was 10 months old in December 1980, so obviously I don't remember it [hearing about John's death] firsthand, but I take solace in the fact that I was alive when all four Beatles were. I also get a bit sad this time each year knowing that I can mark how many years he's been gone by the same number of years I've been alive. I've been a Beatles fan literally from birth thanks to my parents. I remember when I was in kindergarten in 1985 and a schoolfriend told me "did you know John Lennon was shot?" I remember running into my house after school crying and telling my mum "somebody shot John!" and she had to explain to me it had happened five years before.

I try to not let the deaths of famous people that I've never met affect me, but the Beatles have touched me on such a deep level over my entire 35+ years on this planet that in the case of John (and George), it does affect me and I'm OK with that. The beautiful thing is that every time I hear his songs and I hear his voice, I feel good inside."

For me, today, as it is every year, is a day for listening to the Beatles and solo John, enjoying the music, and remembering the supremely talented, complicated, flawed, conflicted, and ultimately good man he was. Gone but never forgotten, and somehow a little piece of him belongs to all of us who love his music, his artwork and writing, and his overall message. Thanks for what you gave us, John. 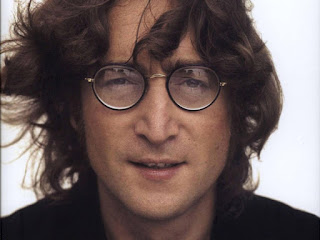