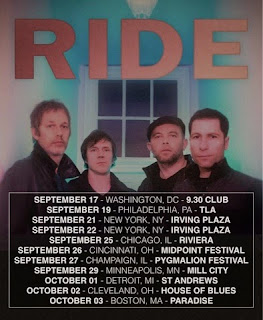 I'll forever be indebted to my longtime friend Carsten for introducing me to the music of Ride in the late 1990s/early 2000s when we were both graduate students. We had (and still have) a lot of similar musical tastes and one day he asked if I'd ever heard of this band from Oxford, England called Ride? I hadn't so he let me borrow a couple of their CDs and that was it..I was an instant fan. I ended up buying all of their albums shortly after, although in my research to learn more about them I was upset to read that they'd broken up five years earlier. "Oh, well," I thought, "just another band I got into a little bit too late to ever get the chance to see live." Fast forward to 2014 and the exciting news that Ride would be reforming and playing some concerts, including in the USA! My enthusiasm was dampened a bit when I noticed they wouldn't be coming to Boston and while normally I'd have no problem traveling to the next nearest major city (which in my case would be New York City) to see them, I just figured it wasn't meant to be. However, two weeks ago they announced that they were tacking an east coast leg on to the of their tour and lo and behold, the final show will be in Boston!

I sent a text off to Carsten and he told me he'd heard about, too, and said he was buying tickets and did he want me to get one for me? How could I say no to an offer like that?  Along with our longtime mutual friend Jon, we decided to go for it. Carsten got the tickets last week right after they went on sale, and so we'll be finally getting our chance to see Ride! I'm thrilled for a number of reasons, including: 1) finally getting to see Ride in concert; 2) getting to catch up with two great friends who I haven't seen for a couple of years; 3) the chance to get back home to Boston; and 4) checking another of my favorite bands off my "must-see" bucket list. They're all important to me, including that last one because so many of the bands I love are from the UK and in recent years, their modus operandi seems to be to not play (m)any shows in the US other than the occasional festival (*cough cough* Blur *cough cough*). To see Ride in a small club (I've seen many shows at the Paradise over the years) will be a real treat.

An in-depth band profile on Ride will be forthcoming; they've always been on my list of bands to write about, but they've moved up in the queue now! For now, I'm just really looking forward to the entire experience in October.

Are any of you reading this fans of Ride? Have you ever seen them live? If so, please share your thoughts in the comments below...thanks!