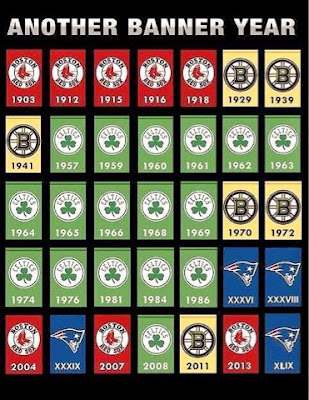 Incredible. Absolutely incredible. That was, hands down, one of the best football games I've EVER seen in a lifetime of watching football, and I've seen a lot of games. When Seattle's Jermaine Kearse made that crazy bobbling catch on his back late in the game, I went white as a ghost and said out to loud to my wife and kids "Oh, my God...we're going to lose a third straight Super Bowl on a freak catch." It brought back nightmarish visions of those two losses to the Giants in 2007 and 2011, both of which happened due to fluke catches with less than a minute left.  My wife was telling me it wasn't over yet, but I kept fearing for the worst having seen those two heartbreakers before (as well as various Celtics, Bruins, and Red Sox gut-punch losses over the years). But then, a miracle: an interception in the end zone with twenty seconds left by Malcolm Butler, a rookie who had made a great play on the previous Kearse play that still ended up being caught. Euphoria. Screaming and yelling and jumping up and down and pounding on the floor. Victory. The elusive fourth championship for this team, all of them coming since 2001. The continuation of their dynasty and their decade-and-a-half (and counting) of dominance. It was doubly sweet to silence the brash, loudmouthed (and, admittedly, supremely talented) Seahawks and spoil their quest to be the first back-to-back Super Bowl winners since the Patriots themselves in 2003 and 2004.

It's Monday morning, I'm exhausted from staying up until two in the morning to watch all of the postgame television (thankfully, I can get my Boston sports channels on DirecTV) and I have a long and busy day at work ahead of me. It's alright with me, though...last night was a fantastic time spent watching the game with family and friends and it ended in the best way possible.

My fellow Boston sports fans, please don't fail in appreciating just how incredible this run of success by the Patriots has been. Think of all of the big games we've seen, win or lose, and the great players that we've been fortunate enough to watch, none more so than Tom Brady, who cemented his place as one of the top two or three quarterbacks to ever play the game. And Bill Belichick, one of the greatest coaches in the history of sports, has been steering the ship (along with Robert Kraft, an owner any fan would love to have for their team) with a steady hand the entire time. He's loathed outside of New England for his gruff demeanor with the press and his endless gamesmanship, but they hated Red Auerbach for the same reasons, too, and all he did was win nine titles as Celtics coach and seven more as their GM.  We Boston fans don't care what anyone else thinks of us or our teams. For the ninth time in fourteen years and the THIRTY-FIFTH time in sports history across all four of our teams (17 for the Celtics, 8 for the Red Sox, 6 for the Bruins, and 4 for the Patriots), we are the City of Champions and we keep our crown as the best sports city in America.