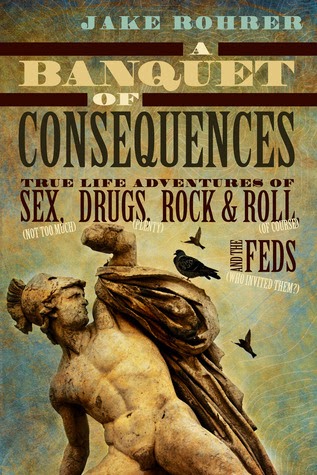 There's always a great story behind the scenes when reading about any well-known rock band, and oftentimes the supporting characters are as interesting as the band members themselves.  This can safely be assumed to be true given the sadly ridiculous and pathetic (in the literal sense of the word) story of Creedence Clearwater Revival.  My review of Hank Bordowitz' excellent biography of the band, Bad Moon Rising, prompted a lot of discussion on message boards across the Internet as to the tragedy of the band's split and the never ending acrimony that persists to this very day. Clearly, there are a lot of interesting angles to the CCR story, so when I was approached by their former associate Jake Rohrer and his publishing company about reviewing his brand new memoir for my site, I jumped at the chance.


***special thanks to John at Inkwater Press and Jake himself for asking me to review this book!***

Jake Rohrer acted as a manager for CCR during their all too brief career, having been friends with the "boys from El Cerrito" since first encountering them in high school. He was involved in their career from their beginnings as the Blue Velvets and the Golliwogs, all the way to the superstardom they achieved as CCR. He also worked for John Fogerty as his personal assistant for almost a decade after the band broke up before he was let go during John's long and frustrating period of writer's block and the endless lawsuits of the late 1970s. It was around this time that Jake got drawn in to the burgeoning drug trade, first buying and selling small amounts of cocaine before going into business with his brother and some associates and starting to make big money importing massive quantities of the drug and selling it for huge profits. He initially started doing this when he was hard up for money after the end of his time with John and the dissolution of his marriage. Not wanting to go back into the family automobile dealership business, he found this an easy way to earn a living, and while not a full blown addict, Jake did find himself using the drug more and more as he went along. However, eventually the Feds caught up to him and his associates, and his "boss," who had always preached a code of loyalty and silence, turned around and served up everyone in exchange for a lighter sentence. Pleading his case and pointing out that he was guilty of a lot less than some others were (including the fellow who ratted him out) proved fruitless and Jake found himself staring at a long prison sentence.  However, rather than stew over it, he accepted the consequences of his actions and took his punishment like a man, so much so that he came to rather enjoy it (relatively speaking) and was able to get out after roughly half of his sentence was served for good behavior. Additionally, Rohrer had the clarity and strength to see his time in prison as a chance to clean up his life, physically and mentally, and he came out the other side with renewed purpose and as a changed man, finding the love of his life and inner peace and contentment.

A Banquet of Consequences is the chronicle of Jake's entire life, starting from his near idyllic childhood in California through his time with CCR and John, leading up to his time in the drug trade and the years he spent in prison repairing his life. While he presents his story out of order, it never feels jumbled or as though you're jumping around reading it; in fact, the deviation from the typical linear flow that is usually used in memoirs is refreshing and works to great effect. Most chapters are a series of extended vignettes that illustrate the highs and lows of each part of the author's life.  They're all enlightening and some of them are downright funny! He makes some excellent points, also touched on in Bordowitz' book, about how the eventual downfall of CCR was due to their attempt to become the next Beatles in the wake of the Fab Four's split in 1970. However, as Jake rightly points out, they didn't have the identifiable individual personalities that the Beatles did,  nor the cross-cultural impact of the Beatles and they couldn't come close to approaching it.  As for how he portrays his time in prison, it almost seems as though he had fun, and it's true that he did seem to have a fairly easy go of it, but he's quick to point out that he is emphasizing the good parts in order to balance the negative aspects that he lived through. Prison is never a good thing, but he is mature enough and reflective enough to recognize that it helped him straighten out his life and that he came out of the experience a better man.

A Banquet of Consequences is a fascinating document of a fascinating life, offering eye-opening insight into the California drug trade of the 1970s and 1980s, as well as the machinations of the legal and penal systems.  Jake Rohrer had experience with all of it from both the outside and the inside, and while he doesn't shirk responsibility for his illegal activities, he also does point out some serious flaws in the legal system and the law enforcement tasked with controlling the drug trade, all of which makes the reader stop and think. In addition, the fact that he was sent to prison for relatively minor offenses in the grand scheme of the drug trade, and all solely on the word of the man who was much more seriously involved in running it, is quite eye-opening. While there aren't too many new revelations on the CCR story for fans of the band, there are several humorous anecdotes about life on the road with the band, many of which come from when they were down to a trio in the wake of Tom Fogerty quitting, which is a era rarely covered in the band's history. However, his story and the experiences he had, both with and without CCR, make for fascinating reading and this book is well worth the time for any CCR or music fan. Sometimes, peripheral characters can have stories as interesting as the main players, and Jake Rohrer's memoir is a case in point.