BOOK REVIEW: The Who Before the Who 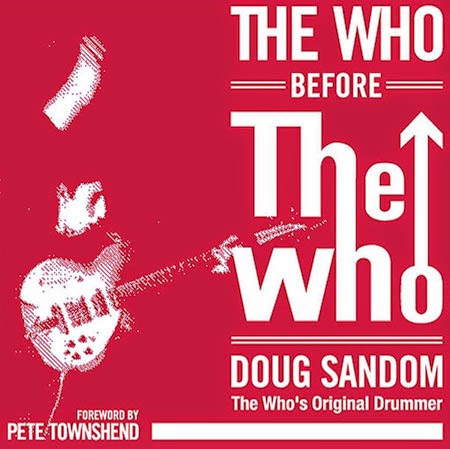 Lennon, McCartney, Harrison, and Starr.  Davies, Davies, Quaife, and Avory.  Jagger, Richards, Jones, Wyman, and Watts.  Daltrey, Townshend, Entwistle, and Moon. Some bands have line-ups that are instantly recognizable by simply the surnames of their members, and these bands are forever cemented with these particular line-ups. However, one thing all of the above bands have in common is that earlier incarnations included a different member who was replaced (for whatever reason) on the cusp of achieving success and fame.  In every case, it was the drummer who was the last to join and solidify the classic line-up, which in the Who's case meant the arrival of Keith Moon in early 1964 and the departure of Doug Sandom.  These members who get left behind before fame and fortune often end up as mere footnotes in the history of rock, but they usually have very interesting stories to tell. The Who Before the Who is Doug Sandom's take on his two years with the Detours, who renamed themselves The Who just months before he left the band.

Doug Sandom was a bricklayer and drummer in London when he joined up with teenagers Roger Daltrey, Pete Townshend, and John Entwistle who, along with a vocalist named Colin Dawson, started playing gigs as the Detours in 1962.  Eventually jettisoning Dawson and changing their line-up to the classic vocals, guitar, bass, and drums format, the band began regularly playing gigs and building up a loyal fan following.  Things in the band were tense between Roger and Pete, which would continue until well into the band's career, but another little known source of conflict was between Pete and Doug. According to Sandom, Pete was moody, introverted, and arrogant and was surly and verbally cutting to everyone around, including Doug, who concurrently founding himself mediating the disputes between Daltrey and Townshend.  All the while, there was an internal power struggle between Roger, who favored the band playing the pop hits of the day, and Pete, who wanted the band to move into a harder-edged R&B and blues direction, not to mention the new songs he was now writing.  Eventually, they caught the eyes and ears of several A&R men, as well as a short-lived manager named Helmut Gordon, which spelled the beginning of the end for Doug. Being a solid decade older than the other three, married with a son and a day-job, Doug was the odd-man out. The consensus from Pete and the producers who auditioned the band at the time was also that Doug's drumming, while solid, wasn't good enough for the band (shades of Pete Best here!).  Pete and Gordon made Doug feel uncomfortable and suspicious that plans were afoot to replace him, and after a spat during a rehearsal, Doug quit the band (but was kind enough to finish off the engagements he was obligated to before they found a replacement). It was a decision he made out of anger and which he has always regretted, although to his credit Sandom acknowledges that Moon was what the band needed and that he most likely wouldn't have been able to handle all of the craziness that was to follow.  He eventually met his replacement, Keith Moon, and stayed close to the band over the years, where he is still their VIP guest to the present day.

Along with the drama surrounding the band's interpersonal dynamics,  Doug also had his fair share of drama at home. His wife, Lily, disliked his spending all of his nights out playing with the band and she grew suspicious of the female fans the group started to attract.  Sandom does admit that he got a bit too friendly with a couple of girls who were fans of his, but that while he grew uncomfortable with the situation he found himself, he never stepped out on his wife and stayed true to her. He also describes some of the more memorable gigs the Detours played, playing on the same bills as other legendary bands like the Rolling Stones, the Kinks, and the Hollies.  There are several passages shared from Doug's diaries at the time which give a bit more of an inside look into the band during those early, formative years.  Finally, the end of the book contains a tour date itinerary of all of the gigs Doug played with the Detours/Who between 1962 and 1964, as well as several pages of photographs.

This book is a short, enjoyable read although I do have a few minor complaints with it. On the whole, it's a bit superficial in the sense that it doesn't scratch too far below the surface to give a real in-depth insiders' account of the band and Doug's time in it.  Several of the anecdotes and quotes were familiar to me from other sources, and while it's understandable that the really interesting stuff happened to the band after Moon's arrival and their fame started to grow, I'm sure there is still a lot of fascinating information from Sandom's time in the band which I would have liked to have had more of.  The pictures are all in black and white and while most look fine, some are reproduced so dark and grainy that it's a bit difficult to discern them. Many of the photos are from the author's personal scrapbook which are really nice to see, but several are common pictures of the Who that have been seen multiple times over the year and seemed out of place amongst the rest.  Lastly, Pete Townshend wrote a ver nice introduction to the book, mentioning just how important Doug was to his development during that time and acknowledging that he (Pete) was difficult to get along with in those years!  Overall, while this book would probably not be of interest to the casual Who fan, for any hardcore Who fan, it's well worth reading to learn a bit more about Doug and what the Who were like before they were THE WHO.