ANNOUNCEMENT: My Upcoming Book on Mansun 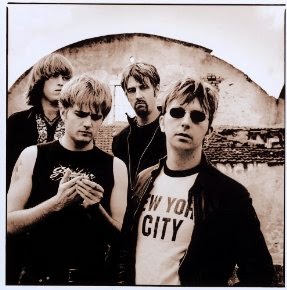 After a long gestation period and a bit of a delay (assuming you can consider three and a half years only a "bit" of a delay), I'm happy to announce that my next writing project will be a new book on one of my favorite bands of all time, Mansun. After I had published the first edition of my book on Blur's live history, Black Book,  in 2009, I began working on a similar book about Mansun. However, from late 2010 to the present I hadn't done any work on it. The few people I'd mentioned it to on the now defunct Mansun and Paul Draper message boards at the time didn't forget and I continued to be asked about its status the last few years. Fast forward to 2014 and there is a resurgence of interest in the band, a coalescence of those of us who have kept our passion for the band for many, many years and new fans who are only just discovering the brilliance of their music. There was a hugely sucessful fan convention in Chester, England only a couple of days ago where fans gathered, with band memorabilia on display, Mansun tribute bands, a souvenir programme, and the premiere of a new Paul Draper solo track, "Feeling My Heart Run Slow," for his (hopefully) forthcoming first solo album. The song was excellent and you can listen to it below.

The new book, provisionally titled "Rock and Roll Losers: Mansun 1995-2003" will be similar in format to my two Blur books (Black Book volumes 1 & 2) in that they were detail the live concert history of the band via available live recordings. Each concert will have an entry with the set list, sound quality, length, and description of the performances. In addition, there will be photographs from concerts as well as any live memorabilia I can get a hold of (ticket stubs, gig flyers, concert posters, etc). Finally, I have the backing of not only the organizers of the Mansun Convention, but of Paul Draper himself, who has offered his input and assistance and to whom I am most grateful.  I intend, if possible, to include a section at the beginning of the book with a biography of the band and more insight into their career as well as their concerts, hopefully using Paul and Andie Rathbone's own recollections. I'm tentatively scheduling the release date for Christmas 2014, although I do ask that you consider this date a bit fluid given that life can be unpredictable and no one knows what delays may pop up between now and then.

This is where you, my fellow Mansunites, come in and can get involved...similar to my Blur books, I am planning on including photos of Mansun ticket stubs as well as tour posters, gig flyers, and any other live memorabilia I can find visuals for.  In order to do this, I'm going to need your help. If you're willing, I'd love to have your scans of Mansun ticket stubs, flyers, posters, and anything relating to the experience of seeing them live in concert that you may have laying around. I'd also be grateful for any live recordings of Mansun you may be willing to send me a copy of that I don't already have. Not only will your contributions help improve the book, but it's a chance for you to be a part of the Mansun story, since anyone who contributes materials will be listed in an Honor Roll at the back of the book as a means of thanks from me to you.

So there you have it...I'm busily working on this in addition to everything else I've got on my plate, and I think/hope it will be well worth the wait. I am beyond excited to (hopefully!) have the input of Paul and Andie, the convention organizers, and to finally be able to share this work with the rest of the passionate and faithful Mansun fans all over the world.