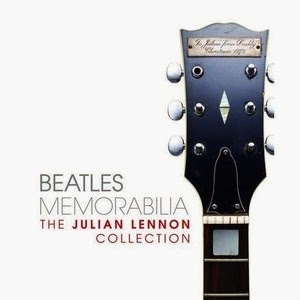 Rock music memorabilia in general and Beatles memorabilia in particular are in high demand and can command premium prices for those interested in collecting these pieces of history. From the moment that they first burst onto the scene in 1962 all the way to the present day, there has been and continues to be an almost insatiable demand for any memorabilia having to do with the Beatles. The focus of this recent book, Beatles Memorabilia, is the personal collection of someone who was closer than anyone else to the band and their phenomenon: Julian Lennon, son of John Lennon and his first wife, Cynthia.

***special thanks to Josh at Sterling Press for sending me a copy of the book to review!***

The Julian Lennon collection of Beatles memorabilia has a back story that's equally interesting and sad.  Julian had some things that John had given him when he was alive (like some guitars, postcards, etc) but after John's death, Yoko did not give him anything of his father's. After suing Yoko, Julian was awarded a settlement from his father's estate, and has been using that money to purchase various pieces of Lennon and Beatles memorabilia that have special significance to him. As he has adroitly put it in recent years, in an ironic way, he's now using his father's money to buy back his possessions!
The result is an impressive and extensive collection of artifacts, many of which are captured in this handsome volume.

Author Brian Southall, who also authored the recent Beatles in 100 Objects book that I reviewed last year, as well as Northern Songs (which I also reviewed recently), chronicles Julian's collection in this book. The layout of the book follows the Beatles' career chronologically and starts with pre-fame artifacts and continues through the various phases of their career. After the break-up, Julian's collection includes many pieces from their solo years up to and beyond his father's untimely death in 1980. The book is filled with gorgeous, large full-color photographs of the various pieces accompanied by Southall's descriptions. Scattered throughout the book are passages in Julian's words, where he elaborates on the meaning of the pieces and offers any memories he has of them and what personal significance they hold for him. Unfortunately, these did not accompany every piece in his collection, which was a shame because they were very interesting and offered additional insight into the objects.

Many of the items Julian has collected will be familiar to serious Beatles fans, such as John's afghan coat from 1967, his cape from the Help! film, and various letters and postcards he wrote, but there are many items that are quite unusual and unique, such as the Apple car hood ornament that was on the vehicle that John was driving when he, Yoko, Julian, and Kyoko had their accident in Scotland in July 1969. There is a badge/button maker John had used to make homemade badges/buttons for himself in the 1970s. There are various postcards and letters John had written to Julian and Cynthia, as well as Paul's handwritten cue sheet for the recording of "Hey Jude," which he of course wrote for Julian. There is a homemade Christmas card Paul sent to Julian in the late 1980s as well as a white label copy of his then-unreleased Flaming Pie album in 1997. There is also a complete set of the Beatles' US gold records and singles that they received from Capitol Records which is a really nice mini-collection within the larger collection. I don't intend to go through everything in the book, but suffice it to say there are numerous pieces that are interesting with stories behind them that any Beatles fan will enjoy reading about.

As for criticisms of the book, I have a couple but they're relatively minor. The first is that I would have liked to have seen more of Julian's reminiscences about the various pieces in his collection. The ones that were included in the book were great and left me wishing there were more of them and that they were a little longer. My second criticism is the same as the other book on Beatles memorabilia by Brian Southall that I reviewed, and that is that there were many typos and errors in the book (although not as many in this book as there were in the Beatles in 100 Objects book). Apart from the punctuation errors sprinkled throughout the book, there were a couple of glaring typos that jumped out at me, the most egregious being: the Beatles Anthology being mentioned as having been released in 1965 when it was really released in 1995, and the other saying that their EMI audition was in June 1963 (it was really in June 1962) and that it was before Ringo joined the band, which was subsequently stated as being in August 1962 (which is correct). Apart from these, however, the book was a complete pleasure to read and these mistakes didn't really detract from my enjoyment of it.

In closing, this is a very nice book, both visually and in terms of its content, and the ability to view the collection of someone from the immediate Beatles family and get his memories of many of the items is one that is too good to pass up. As Julian states in his introduction, he doesn't just buy any piece of Beatles memorabilia but rather he buys those to which he has a personal connection or which have a deeper meaning to him. In approaching it this way, he's built a varied, interesting, and unique collection that any Beatles fan will be interested in perusing in the pages of this book.


(As mentioned in the book, a portion of the sales of the book go to Julian's charity, The White Feather Foundation, so Beatles fans can feel good about buying this book beyond just the enjoyment they will get from it).