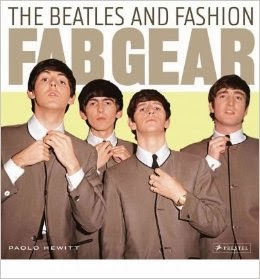 The Beatles' impact on Western civilization in the latter half of the 20th century and beyond was greater than just their music. They were also trendsetters in fashion and style, and this had more to do than just with their suits, boots, haircuts. Up to this point, however, there hasn't really been an in-depth work on their fashion statements and the significance behind them. Paolo Hewitt's book Fab Gear: The Beatles and Fashion aims to fill that gap with a look at the clothes, hair, and overall style that made the Beatles' image as unique as their music.

***special thanks to Samantha at Prestel Publishing for sending me a copy of this book to review!***

Ask anyone regardless of age to tell you the first thing that pops into their mind when you say "Beatles" and "fashion" and I'll guarantee you it will be either their hair or their matching suits. This almost reflexive answer encapsulates the reasons why the band and manager Brian Epstein went for this look in the first place: because it's memorable and it made the four of them a BAND, of in the words of Mick Jagger, a "four-headed monster." However, in Fab Gear, Hewitt does more than just discuss the various looks the band had; instead, he digs a little deeper into the reasoning behind their adopting each look and also places the styles within the contemporary context of the 1950s and 60s to show how the Beatles and their fashions fit in with the overall style of the day, and how their looks were influenced by and subsequently influenced what was going on around them.

The book is broken up into chapters the focus on a particular aspect and/or era of the Beatles style and runs chronologically through their career. Beginning with their Teddy Boy and leather-clad Rocker image in the late 1950s and early 1960s, Hewitt traces the origins of the various looks the Beatles adopted. Interestingly, he not only discusses how and where the band most likely became aware of the various apparel, but also tries to dissect what, if any, symbolism there was behind it. The following chapters carry on in this way, focusing on their suits, hats, shoes, jackets, hair and facial hair, as well as a chapter dedicated to the ill-fated Apple Boutique of 1967-68. The detailed look at their suited look, both onstage and off, from 1962-1966 was interesting, as was the development of the psychedelic looks of 1966-67. Hewitt also did a nice job showing how the look in 1968-70 was a toning down of the florid psychedelia of '67 with a simultaneous melding of their earlier suited look.

Each chapter is accompanied by some beautiful photographs, many in full color. What makes these pictures so interesting is not only the fact that most are of the Beatles themselves, but that many of them are contemporary photographs of everyday people wearing the fashions in their time. It gives a nice snapshot into the life and times of society as a whole outside of the Beatles' bubble. There are also some pictures of the people behind the scenes, such as the band's tailor Dougie Millings, which give a face to a name we've all read about for decades (as one example). There are some fantastic pictures of the interior and exterior of the Apple Boutique as well as some of the original clothing The Fool made for the shop. Given the coffee-table size of this book, many of the pictures are simply stunning and I found myself taking long looks for minutes at a time, taking in all of the details.

Of particular interest was the chapter on the band's hair, mainly for the insight it offered on the Beatle haircuts of the early years. It was also interesting how the author pointed out how Paul always kept his hair relatively short, especially compared to the other three, but was able to give the illusion of longer, shaggier hair via layering and different haircutting techniques his barber was using.  Where Hewitt lost me a little was in trying to attribute deeper symbolism and meaning to John, George, and Ringo's long hair and beards in 1969 and 1970 beyond that just being the trend of the time. I never saw it as a statement they were making on how they felt about the band and I still wasn't convinced after reading that chapter. I've never viewed it as a way for them to consciously show their disinterest so much as it was simply what they felt like doing at the time. There are some other similar instances where, in my opinion, too much symbolism is placed upon mundane or minor fashion choices, and I think the author tries a bit too hard to find a deeper meaning where there is none; I wonder what John would think given his feelings on the matter over the years! There are also some minor typos and mistakes in the text which detract from much, although the labeling of numerous pictures from the Hard Day's Night film as being from the Help! film are inexcusable and a major goof on the part of the author, editor, or whoever let those slip through the final proofreading process.

Overall, this is a very nice and enjoyable look at the Beatles fashions and styles in the 1960s that offers a different but equally important look at a facet of the band that had an enormous impact in their time (and beyond) besides their music. It's a relatively quick read but quite informative and some of the gorgeous pictures alone make it worthwhile.