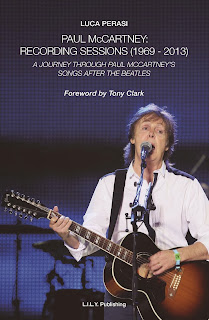 Even though he will be forever proudly known as 1/4 of the best band of all time and 1/2 of one the greatest songwriting partnerships of the twentieth century, Paul McCartney also stands as the greatest and most successful composer of the twentieth century. The sheer quantity and quality of music he's made since the Beatles' break-up in 1970 to the present day is staggering, both as the leader of Wings and as a solo artist. However, until the present, there has not been a book chronicling the entirety of his post-Beatles career until the publication of Paul McCartney Recording Sessions in late 2013.

Author Luca Perasi has chronicled every song Paul recorded and released from the final days of the Beatles in late 1969 to the release of his newest album, NEW, in October 2013. In addition to careful analysis of each song, the recording dates and locations (when available) are given, as are the release details of the songs, and the personnel who performed on each one. Finally, each song has a synopsis written about it, describing its evolution from the initial songwriting to the demo stage and the subsequent recordings (and in some cases, re-recordings!) leading to the finished product. Supplementing each entry are numerous exclusive interviews that the author conducted with several principal players throughout the years, from producers and engineers to session musicians and arrangers. All offer insight into the recordings they discuss and the author does a very nice job integrating them into each song write-up.

The book begins with the recordings Paul made from Beatles' "leftovers," that is songs he'd written while still a member of the Beatles that were intended for subsequent band albums. When it was clear the band wasn't going to make another album after Abbey Road, Paul began recording them with an eye on his solo career. After his first two solo albums, he formed Wings and used the band as a vehicle for his songs while becoming one of the biggest bands of the 1970s. Tiring of the ever-changing band line-ups, Paul broke up Wings in 1981 and embarked upon a true solo career that has continued to the present day. Through numerous band line-ups, producers, and collaborators (including short-lived songwriting partnerships with Elvis Costello and Eric Stewart), Paul has continued to push himself with a work ethic and dedication that still puts most of his younger contemporaries to shame.

One thing that is evident from Perasi's book, especially to the unfamiliar, is how many genres Paul's music has integrated over his entire career. And for myself, even though I'm a lifelong fan of the man and am very familiar with all of his post-Beatles albums, it was really brought into more stark contrast after reading his musical journey through the years in this book. Perasi's book is also incredibly informative and there was a lot of information that was completely new and unknown to me. Of particular interest to me were the entries for Wings' recordings as these are some of my favorite of Paul's solo songs. It was fascinating to see how some songs would be written years before they were eventually recorded, and how many of the recorded songs sat around for years until their subsequent release (usually as B-sides). Additionally, there were an inordinate amount of songs that I knew nothing about, including their existence, and reading some of the descriptions of the better ones has inspired me to seek them out so that I can listen to them for myself.

To that last point, one of the very nice things about this book is the fact that while I was reading it, it made me want to immediately put on the songs I was reading about so that I could listen to them with a new outlook; oftentimes there would be a mention of instrumentation or something buried in the mix that I hadn't been aware of that I now hear thanks to the book. Other times, I disagreed with the author's assessment of some songs and played the song to see if I'd been missing something before (sometimes yes, sometimes no!).  This is a book that, in similar fashion to my own books on Blur, can function in one of two ways; either read front to back as a straight narrative, or picked up from time to time and used a reference book when information on particular songs is needed.

I am assuming that this book is self-published due to the fact that there are no pictures inside. As someone who has self-published both of my books and also declined to include photos due to all of the copyright and legal issues that it would entail, I sympathize with Perasi's decision to do the same. My only real complaint with the book, and it's not really a complaint but more something I just want to point out, is that there are quite a lot of grammatical errors. However, since the book was translated from the original Italian into English, this is understandable and it in no way detracts from the readability of the text, as most of the errors are quite minor. A final quibble is that after a while, the general approach to the song descriptions becomes a bit formulaic and repetitive, but again with 44 years (and counting!) of music under his belt and the sheer number of songs Paul has written and recorded, that becomes inevitable.