BOOK REVIEW: The Beatles Day By Day: The Sixties As They Happened 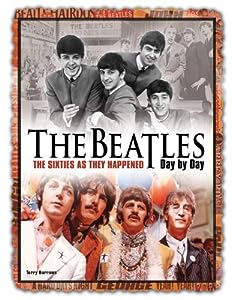 The Beatles and the 1960s are two things that are intimately intertwined; one cannot talk about one without the other. Along that line of thinking, it's an exercise in futility to try and separate out which influenced which more: did the Beatles have a bigger influence on the 1960s, or did the 1960s (as a decade) have a bigger influence on the Beatles? While there is probably no way to solve this interesting mind exercise conclusively, the almost symbiotic relationship between the two cannot be understated. There have been many books trying to take a scholarly approach to this, most notably Ian MacDonald's excellent and essential "Revolution in the Head: The Beatles Records and the 1960s." This new book by Terry Burrows, "The Beatles Day By Day: The Sixties As They Happened," does not try to take such a scholarly approach. Rather, it attempts to combine the diary format of Mark Lewisohn's seminal "The Complete Beatles Chronicle" and a lighter cultural analysis into an attractive, easy-to-read, and informative book.

***Special thanks to Sarmistha at Chartwell Books for sending me a review copy of this book!***

The book is laid out similarly to Lewisohn's aforementioned book: it's split into eras, which roughly coincide with each year of the 1960s and the Beatles albums released in that year, although there is a bit of bleed over (ie the entry for Sgt. Pepper and Magical Mystery Tour spill over into early 1968, and the White Album section doesn't start until May 1968 when the recording sessions for that album began in earnest).  Within each section, key dates and events are highlighted...at just shy of 200 pages, this book doesn't attempt to be as exhaustive as Lewisohn's book, which literally lists what the band were doing on every day of every year throughout their career. Rather, this book takes the high profile dates and tries to present them in the broader context of the decade. Concurrent with this are inset boxes on the side of each page that highlight a particular cultural event or figure relevant to that part of the 1960s. These include anything from the assassination of JFK and Martin Luther King, to Jimi Hendrix and Pink Floyd, to Twiggy and Jean Shrimpton, and so on. By this method, the author is trying to place what's happening in the Beatles' lives in wider perspective with the goings-on of the decade as a whole.

The book is laid out in a nice, easy to read layout with each entry not taking up more than a small paragraph, typically between three and seven sentences per entry. There are a lot of very nice pictures throughout the book, most of which have been seen before but several that were new, at least to me. These pictures, while predominantly of the Beatles, also include full images of relevant sixties figures, from The Grateful Dead to Janis Joplin, Howard Wilson to Queen Elizabeth, etc.


As for the content itself, while it's an enjoyable book to read front-to-back, it's also easy to choose a particular time of interest during the 60s and just read about that. Since it's not as exhaustive as Lewisohn's diary of the Beatles, most hardcore Beatles fans like myself will find little, if any, new information in this book. However, for a younger or newer fan, or one who is just not as concerned with all of the minutiae of the band, this book will be of interest and will also be quite informative. As for my only really major complaint with the book, it is part of a troubling trend I've noticed lately with new books (for instance, see my review of The Beatles in 100 Objects): TYPOS! And lots of them, at that! In some cases, it's only a letter or two that is incorrect (such as "Dob Dylan" instead of "Bob Dylan"). In most cases, however, it is incorrect information: in one instance, in the section detailing 1965, a picture of John, Ringo, and their wives which was clearly taken in 1965 (based on their hair and outfits), the picture is captioned as being from 1967! In another case, an entry in late 1968 refers back to the Lady Madonna single as being released in February 1969, when it was of course February 1968. Ringo is even having been mentioned in the 1962 section as having "joined the band in spring 1962" when it was actually in late summer (August) 1962. These are not errors that I believe the author or editor were simply wrong about, as these facts are easily and readily available and known to any Beatles fan with more than a passing interest in the band. I put these down as simply sloppy editing and proofreading, and are my major grip with an otherwise attractive and enjoyable, if lightweight, book. This isn't an essential book for a diehard fan, but at the same time I'm happy to have it on my bookshelf and I do think it will be a great starting point for my children (who are already big fans of the Beatles' music and are starting to get interested in the band) to learn more about them...a sort of gateway book, if you will, an entry to learning more behind the band beyond the music.