BOOK REVIEW: The Beatles in 100 Objects 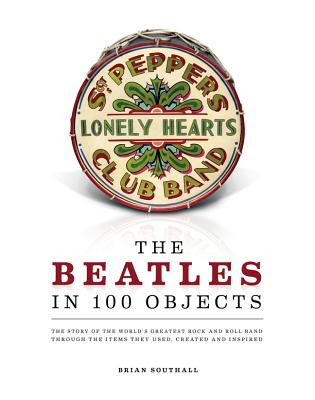 Besides their timeless music, the influence of The Beatles stretched, and continues to stretch, beyond music and into fashion, film, and so on. Concurrent with their massive initial success in 1962-64 in the UK and USA was an explosion of merchandising, the likes of which had never been seen before (and is now so commonplace as to be almost passe). In the new book "The Beatles in 100 Objects," noted Beatles memorabilia researcher and writer Brian Southall approaches the history of The Beatles a little differently and tells the story of the band through 100 objects "used, created, and inspired" by them.

***Thank you to Josh at Sterling Press for sending me a review copy of this book!***


The book is laid out in a very organized and pleasing manner, with each two-page spread set up the same way: the left hand page has the title of the object followed by a page-long mini-essay on what it is, it's significance, and any historical details to go along with it. The right hand page has a full-sized photograph of the object. In many cases, the following page spread has a photograph of one or more of the Beatles with said object, putting it into visual context. The author has also organized the objects chronologically, starting early in their careers with, for example, guitars used in the Quarrymen days and moving through the years in order. The bulk of the book is taken up by items from the Beatlemania period of 1962-1966, although several interesting objects from 1966-1970 are certainly also present. The objects themselves range from personal items (George's leather jacket from Hamburg, Paul's Hofner bass, George's first Gretsch guitar, Ringo's Premier drum kit when he first joined the band, etc) to ticket stubs, concert posters and programmes, and record charts. Additionally, there are several interesting pieces of vintage merchandise (a mini Beatles record player, a Beatles harmonica, a Beatles "create-your-own-hairdo" toy, etc). All of these objects are presented in very nice quality color photographs that really help bring them to life. The essays themselves that accompany each item are interesting and informative, even if they don't contain any new information for diehard Beatles fans, such as myself.

However, this discussion on the essays leads me to the one major criticism I have of this book: typos. Lots and lots of typos.

These range from those that could result simply from slipping through the editorial cracks, such as:
- "Tom Ten Club" instead of "Top Ten Club"
- "win" instead of "in"
- "were" instead of "where"
- "Fee weeks" instead of "few weeks"
After a while, I gave up keeping track of all of the typos.

Some mistakes are factually inaccurate, such as claiming that the Beatles final live appearance in Liverpool was in December 1964 when it was really in 1965. And some are simply embarrassing, such as calling Tony Sheridan "Mike Sheridan," especially since this error occurs one paragraph after he's correctly called Tony! This same error is repeated with Peter Blake, who is called "Peter Black" only one paragraph prior. The final one may be the worst of all: when explaining one of the objects, which is a postcard that Ringo sent to a friend when they were on tour supporting Little Richard, the author describes what is written and makes the bizarre claim that Ringo was being "cheeky" and called Little Richard "fat." Not only does this make no sense, but if one reads the postcard on the opposite page, even given the scribbled handwriting, one can conclude from context that Ringo wrote "Little Richard is fab," not fat.  Besides making infinitely more sense than randomly calling him "fat" within the context of the postcard, it should be common knowledge, especially to the author who has worked on projects concerning the *Fab* Four before, that this was a word in common use at the time, especially among the band themselves. While typos and the odd bit of specialized trivia can be (somewhat) excused, this "fab/fat" error is on the author. Perhaps it bothered me more than it should, but there you have it in any event.

One other thing I would do to change the book would be to actually number the objects. This is a minor quibble, but while it's nice that there is a list of all 100 objects in order at the front of the book (including page numbers), it would be nice as one is reading along to know what number object they are reading in order to have more of a sense of where they are in the Beatles story. It wouldn't make a huge difference, necessarily, but I still think it would be nice. Finally, the choice of objects is an almost impossible task to please everyone with, and I think overall the author does a nice job. While there does seem to be a bit of an over-reliance on ticket stubs and concert posters, overall I think he does a nice job choosing pieces of interest.

In conclusion, this is a very nice book that I think any Beatles fan, regardless of how serious a fan of the band they are, will enjoy. Apart from the typos, there's not much to complain about and if you don't let those get to you, you will thoroughly enjoy this book as much as I did.