One of the Ultimate Historical "What If" Questions 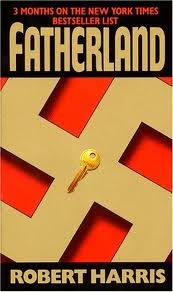 I'm currently reading the novel Fatherland by Robert Harris. It takes place in an alternate history where Germany won WWII and by 1964 (when the book takes place) is engaged in a Cold War with the USA. It's a story of murder and political intrigue that takes place against the backdrop of the preparations for Hitler's 75th birthday and the upcoming visit of US President Joseph Kennedy (who in real life was a Nazi sympathizer) to Berlin. I'm about a quarter of the way through it and so far I'm really enjoying it.

For anyone who doesn't know, I'm a big history buff in general and a WWII history buff in particular. The alternate history where Germany defeated the USSR and retained the lands of Europe and northern Africa that they had conquered by 1944 is an interesting (and scary!) one to think about. I've got a bit of a personal connection as well...my paternal grandfather fought in Europe in the US Army during the war and his brother was in the US Navy and was killed. My maternal grandfather grew up in Greece under German occupation and was a teenager during the war years. I am, of course, forever thankful that history ended up unfolding the way it did. That being said, this is a very interesting book and a genre I'm looking forward to reading more of (I've already got several other alternate history WWII novels lined up after this one).

Has anyone out there read this, or other books like it? What did you think?