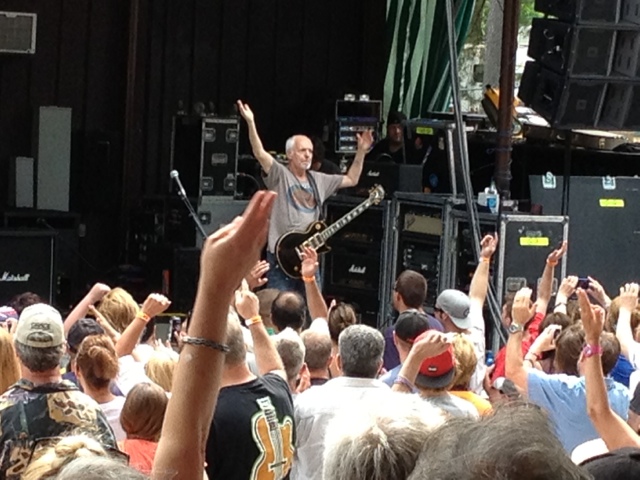 On June 30, I went to see Peter Frampton at the Indian Ranch in Webster, Massachusetts with my dad and brother. It was part of his "Frampton's Guitar Circus" tour where he is joined by different guitar legend friends of his for different legs on the tour.  My dad and brother have seen Frampton several times before but this was my first time. I've been a fan of his for many years, both his work as an original member of Humble Pie as well as his solo stuff, so I was very excited to finally see him in concert.

This venue is pretty nice...it's a stage with probably seating for ~1200 right on the lake, and it's only 15 minutes from my parents' house which is an added bonus. The show was opened by Sonny Landreth and his trio. I'd heard of him but this was the first time I'd heard or seen him and he was excellent. He's a slide guitar wizard and they played a great set although the sound was a bit too loud and not mixed as well as it could've been, with the vocals too low and the bass guitar and bass drum getting swallowed up in the high end of the mix.

After the changeover, it was time for the main attraction! To my delight and surprise, The Beatles' "Being For the Benefit of Mr. Kite," in keeping with the circus theme, played as the intro music when the band came onstage.  After massive cheering, they kicked off the show with a bunch of Frampton classics: Magic Moon, Doobie Wah, Lines On My Face, Show Me the Way. Peter was walking all over the stage, clearly having fun, and ripping off some incendiary solos and singing with joy. It must be said that his band was fantastic, and a guitar duel between Frampton and his guitarist during I'll Give You Money was jaw-dropping.

During this tour, special guests have been coming onstage at different shows to take the lead for a few of their own songs. At previous shows, Roger McGuinn, Robert Cray, Leslie West, and BB King have joined in on some songs. At this show, The Eagles' Don Felder joined in the middle of the show for a great version of a song I'm usually not a particular fan of, Hotel California, and a cover of Stevie Ray Vaughn's Pride and Joy. After, Baby I Love Your Way and an instrumental cover of Black Hole Sun followed, and the show then wrapped up with the classic Do You Feel Like We Do and a cover of The Beatles' While My Guitar Gently Weeps, again joined by Felder.

Besides the top-notch musicianship, what really shone through for me was the sheer joy and fun coming from the guys onstage, which was given right back by the crowd, who were really into it. It's one of those give-and-takes between performer and audience that doesn't always happen, but when it does, it really adds to the show.

If you haven't seen Frampton (who is a criminally underrated guitarist...he's definitely one of the greats), do yourself a favor and go see him...you won't be disappointed! I hope to catch him again next time he comes around here, and you should, too!

(I took a bunch more pictures and I'll add them to this post ASAP).
bands blog Boston concert fun review