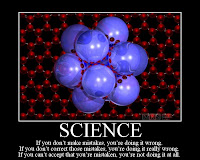 Maybe you don't know this, but I'm a bit of a nerd. Yeah, I like to watch Star Trek and read the Dune books, blah blah, but I'm also a real nerd, academically. For my career, I'm a PhD Organic Chemist, so naturally science and the wonder of discovery fascinate me and have since I was a kid. And my dorkiness helped in picking organic synthesis as my calling...I always liked to build models and repair things as a kid, so when I was an undergrad and I found out you could make molecules? Well, I was hooked.

So, after 4 years of undergrad, 5 years of grad school to get my PhD, and 2 years of postdoctoral training, here I am at the ripe old age of 31 working as an organic chemist for the last 3 years. Sounds like a nice story, right?

And it is, for the most part, but the one thing that's been nagging me incessantly the last couple of years is the fact that it took me until I was 28 to finish my education and training before I got my first "real" job. And that's on the young side since I finished high school at 17, college at 21, and grad school at 26. Most of my peers are older, anywhere from 1-3 years older, to considerably more (depending on if they worked in between degrees, came back to finish up, etc).

Simply put, the ratio of years education to compensation is not working in the favor of me or any of my other chemist friends/colleagues, at least those of us under the age of 40. Don't get me wrong, I have a steady job and make a good salary. But I started making this money at this job when I was 28. I have friends who graduated with Bachelor's degrees when I did (or later) 10 years ago who were making then what I'm making now...and are making more than me *NOW*. It's a tricky thing, because on one hand, the advanced degree in chemistry has made it so that I have more upward mobility and opportunity in my career future (this horrific economy and job market nonwithstanding), but on the other hand, I "wasted" basically my entire 20s getting this degree and getting paid a pittance for it as a stipend, while a lot of my peers were working real jobs and making real money. Many of us got married and started families in our early to mid-20s (at least, I did) and while I wouldn't trade my wife or 4 kids for anything in the whole wide world (marrying Kristie and having our kids are the best things I've ever done, hands down, and I mean that with every fiber of my being), I feel bad that I spent the last decade not able to support them as well as I could have.

The other thing is, the majors my peers had studied, and the fields that lead to good careers almost right out of the gate, are fields like business, computers, engineering (any of them...mechanical, chemical, electrical, etc). Chemistry, while vital to our country and society in nearly every way, from pharmaceuticals to polymers, plastics, agriculture, materials, medicine, healthcare and beauty, etc, is not a particularly lucrative career path. While you can make a nice living off of it, it takes a long time and a hard road, oftentimes, to get there. And that's the quandary.

I'm torn because I truly love science in general and chemistry in particular. There's been a lot of talk lately in the national media here how we "aren't training enough American scientists." And it is true that the majority of graduate students in the hard sciences are foreign students (not only is this simply fact, I can attest to it from personal experience, having spent the years 1997-2008 in chemistry departments getting my degrees). However, I disagree with their thesis that it's delayed career and compensatory gratification that is the deterrent, because let's face it, the most popular majors on college campuses tend to be in the liberal arts, and those kids come out of school earning next to nothing. So I don't think it's necessarily the case that it's better money too far down the road that's the problem. I think instead it's the fact that, at least with chemistry (since that's what I know), you can come out of college with a BS and make ~$40,000/yr, spend 2-3 yrs to get a MS and make ~$55,000/yr, or spend 5+ years to get a PhD, plus 1-3+ yrs at a postdoc, and come out making, on average, about $75,000/yr. Granted, your future career ceiling is higher if you come out with a PhD at the end. But how much more attractive is it to forgo an extra 2-8+ yrs of school (during which many students are treated like indentured servants and cheap slave labor...true, tuition is waived and we get stipends, but it's barely enough to live off of if you're single, never mind if you're married and/or have kids)*** and spend your 20s making real money instead of making ~$15,000-25,000/yr and still be in school until you're 30? Again, I'm not saying I'd go back and do it differently...I made my decision and for the most part, I'm very happy with it. But it is a concern for current and future students.

I have much more to say on this, but I'm going to stop here and let you digest this and think about it. I'd love to hear from any other people who are scientists or in other fields where this line of thinking may apply. Does love of science trump these other concerns?

***DISCLAIMER I am not saying I was treated like a slave in school, because I wasn't. While both of my advisors were demanding and expected a lot from me, I worked very hard because I genuinely love chemistry, and with a few rare instances, I look back on my grad school career with fondness. I know I'm lucky in this regard, as this isn't always the case...
chemistry general opinion science