BOOK REVIEW: The Beatles in Cleveland 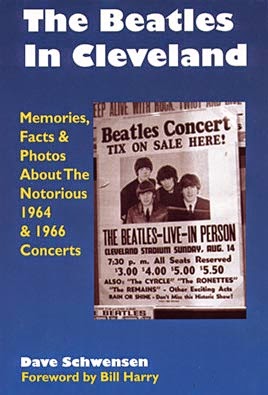 The enduring images of Beatlemania are etched into 20th century history...photographs, news reports, and video footage of fans going crazy at the mere sight of the Beatles during their touring years of 1963-1966 capture the frenzy, excitement, and insanity their presence caused. There was, quite literally, a mini-riot nearly everywhere they went. In fact, it's one of the main reasons they decided to retire from touring in August 1966. However, what many fans may not realize is that two concerts in particular, occurring on two separate US Tours, were the sites of fan rioting the likes of which the Beatles had never encountered. More than that, they happened in the same city!

***special thanks to author Dave Schwensen for sending me a copy of his book!***

Dave Schwensen, author of the excellent book The Beatles at Shea Stadium which I reviewed earlier this year, is a Cleveland native and was actually present at the 1966 Beatles concert at Municipal Stadium. Using personal memories of the experience, as well as the extensive research and interviews he conducted, he takes the reader back to the heady cultural crossroads of the 1960s, presenting the contrast between 1964's innocent, good-time Beatlemania with 1966's growing restlessness in a way that takes you right back to those moments. This is especially the case for readers (like me) who are too young to have experienced it all firsthand.

Dave begins the book with a foreword describing how a random drive through the streets of Cleveland on a rainy day in 2006 while listening to side two of Revolver brought all of the memories of that special night forty years earlier at Municipal Stadium rushing back to him. He then describes what Beatlemania was like for the teenagers and young adults who were growing up at the time before he relates his interviews with those responsible for bringing the Beatles to Cleveland on their 1964 US Tour. That concert, at Cleveland Public Hall, was in front of approximately 10,000 screaming fans and had to be stopped partway through after fans began rioting, destroying seats and rushing the stage! The situation was so bad that the city banned the Beatles from appearing again, and indeed the band bypassed the city on their 1965 tour.

However, in 1966 promoters were able to convince the city to give them another chance, and the Beatles were booked to play the much larger Municipal Stadium, which could seat as many as 80,000 (in the end, 20,000-25,000 fans attended the show). The thinking was that the larger outdoor venue would make it easier to control the crowd. However, this didn't end up being the case...in fact, things were worse than before! A full scale riot and stage invasion ensued during the fourth song, "Day Tripper," with the concert considerably delayed and at one point cancelled outright before local DJs on stage and the police calmed the crowd down enough so that the band could finish the show.  With makeshift barriers and a minimal police presence that would be laughable today, it is a wonder that no one was seriously hurt although there were several people who were nearly crushed to death at the front of the stage by the crowd pushing from behind.


Incredible footage, including the riot that happened during "Day Tripper" (at 3:25 in the video)

Using his own recollections as well as those of other fans who were at the shows, in addition to local television, radio, and newspaper personalities, Schwensen paints a vivid and exciting picture of how electric the atmosphere was for both concerts. It's also a lesson in how innocent and new everything was back then, especially large scale rock concerts. Until the Beatles, rock music was still played in theatres and music halls, packaged together with other acts in travelling variety tours. Breaking new ground with every step, the Beatles helped to rewrite the rules but in the process were part of many of the growing pains of the nascent rock industry, such as crowd control in these two cases!

In addition to the memories of those who were there at the time, there are numerous photographs of memorabilia relating to the Beatles and their two concerts in Cleveland, most of them from the author's personal collection (including his ticket stubs from the 1966 show!). There are also many photographs of the two concerts, including the scenes of stage mayhem in 1966 which are quite shocking to see! Fans are pulling on Ringo's arm, wrapping Paul up in bearhugs, and tearing at their suits. They had to escape to their trailer behind the stage and poor Ringo had to jump off of his drum riser off the back of the stage and be caught by the crew before being rushed inside. It's all captured in pictures and is a bit scary to see! Throughout it all, according to witnesses inside the trailer, the band (especially John) thought it was all a big laugh although it's almost certain that crazy situations such as these, especially with John's comments on Beatles and religion having been taken out of context in America and adding to the tension over the course of the entire tour, were a huge factor in the cessation of their touring.

As with his Shea Stadium book, Schwensen is able to put the reader back in that moment in time and convey what the feeling was like...short of having been there in the first place, it's the next best thing. The only things in the book that I found to make minor complaints about were a few minor typos and some of the photographs being hard to make out because they are all in black and white. Otherwise, the book was a fun read and really gave an idea as to what Beatlemania was like in this one particular city; it also shows the reader that these were not isolated incidents and that it was like this everywhere else the band played. Whether you were around at the time or are too young to have been there, The Beatles in Cleveland will show you what it was like to be in the center of the maelstrom of Beatlemania while it was happening in your city.